People are into cryptocurrency worldwide and now, so are the world’s leading companies! Why would such giants invest their multi-million funds into a cryptocurrency? Well, there is more to crypto than you read online, and the hidden benefits are why giant companies convert their funds into the digital form: less for now and more for the future.

Cryptocurrency has all the chances to become the future of currency and exchanges; you should not be surprised if you notice that many well-known companies have crypto portfolios. This article talks about the giant companies in the Crypto World and their investment.

Why do worldwide brands invest in crypto?

Let’s think about the real reasons why giant companies make a decision to invest in cryptocurrencies. Here are some of them.

Inflation or other terms that explain currency devaluation in countries do not always apply to crypto. For example, all companies in a country face the same inflation fate. However, cryptocurrency is a worldwide digital currency with potential power over inflation.

Payment is one of the useful approaches to a successful trade. Everyone in the business sector is excited about the payment flexibility adapted to cryptocurrency, which is important for cash flow (receive and disburse payments).

Cryptocurrency exhibited its power during the pandemic because the havoc effect could not stop the digital currency. Although cryptocurrency might be affected in some areas, it does not stop flowing and exercising its properties compared to other financial associations like physical banks.

Long-term valuation is rather difficult to support in physical funds and other assets. However, digital currency maintains a high value over a long period. Cryptocurrency keeps this property because it buffers hyperinflations, failures, regulations, and government influences – these are why banks and other financial organizations cannot express more than they currently display or supersede crypto.

“Public ledger” (decentralized network) holds all cryptocurrency transactions instead of the individual ledger. Cryptocurrency keeps transparency at the maximum rate, making it difficult to mismanage or adjust a transaction. Any transaction is recorded upon activation – this beautifies business and collaborations between organizations.

Cryptocurrency improves business security, especially in the finance department. Crypto is not free from internet fraud; however, it saves companies from miserable financial scams. The reason is linked to the difficulties in bypassing the decentralized network: it is impossible to quickly pass through the crypto security compared to an individual company’s security. And this is why crypto has more grounded value than other financial assets.

Many millennials have one or more cryptocurrency portfolios; they are happy to deal with crypto and companies with the same interest. Brands that invest in cryptocurrency are considered refined companies because they engage in the new popular financial mechanism. 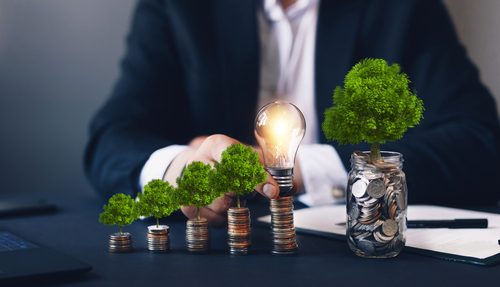 Top 10 companies that contributed to cryptocurrencies

Several companies have moved into the Crypto World, not being afraid of it and showing that it’s cool to be a part of the crypto community. Some companies are summarized below as the top 10 companies that contributed to cryptocurrencies.

Alphabet Inc is a multi-technological company in California. Alphabet Inc does not consider that cryptocurrency is controversial because it invests about $1.5 billion into the sector. The company gives a great challenge to other companies observing and contemplating entering crypto.

BlackRock is among the world’s famous and leading investment and risk management solutions providers. The company was founded in 1988 and has invested about $1.2 billion Circle and Anchorage Digital through a 3-rounds of funding.

Morgan Stanley showed great interest in cryptocurrency by investing $1.11 billion in companies like Figment and NYDIG. The company executed the investment in 2-rounds.

Goldman Sachs was established in 1869 - as a multinational investment bank created by Marcus Goldman. The investment bank invested in cryptocurrency with a value of $698 million. The company contributed to blockchain organizations like Certik and Coin Metrics.

The Bank of New York Mellon Corporation, regularly known as BNY Mellon, is an American venture banking administration settled in New York City. The company gave $690 million to the crypto sector. It invested in Coin Metrics and Fire Blocks.

PayPal Holdings, Inc. is an American worldwide financial innovation organization working with a web-based installment framework in most nations that help online cash move and fills in as an electronic option in contrast to conventional paper techniques. PayPal holds about $650 million in blockchains invested in Talos and Layer Zero.

Microsoft Corporation is an American worldwide innovation enterprise that produces the program, shopper hardware, PCs, and related administrations settled in Washington, United States. The company contributed with values totalling $477 million in 2-rounds. The brand invested in companies like Palm and Consensys.

The Commonwealth Bank, or CommBank, is an Australian worldwide bank organization across New Zealand, Asia, the United States and the United Kingdom. The bank showed interest in cryptocurrency, with values totalling $421 million in 4-round. The brand invested in Gemini, Lygon and some others.

Prosus N.V. is a Dutch global combination organization, the worldwide internet resources division of South African Naspers. The biggest internet organization in Europe showed interest in cryptocurrency with $260 million in 2-round.

Everyone deserves the best in financial security. It is not a crime to over guard one’s assets, especially monetary value – this is the same reason companies move into the Crypto World. They try as much to keep their hard-earned money safe.

More companies contributed to crypto, however, we picked the top 10 companies for this article. Each company contributed based on monetary value and invested in other companies (mostly those specializing in crypto trading and other aspects). The time will show: maybe sometime soon we will see most of the world's brands investing in cryptocurrencies. By the way, we have already investigated famous fashion brands joining crypto and moving to Metaverse — check out this post to learn more!

Everything you want to know about Masternodes

Let's dive into the Metaverse and see what (virtual) real estate looks like!

Everything you want to know about Masternodes

Let's dive into the Metaverse and see what (virtual) real estate looks like!