Aave is a decentralized platform that has its own cryptocurrency of the same name AAVE. We suggest you to take a look at the history of this token and AAVE price predictions that were made by various crypto services.

Established in 2017, the London company gets its name (Aave) from the Finnish word “ghost”. The idea behind this platform is to allow users to borrow and lend cryptocurrencies. The founders of the Aave project, Stani Kulechov and Jordan Lazaro Gustave, at first created ETHLend (a trading platform where lenders and borrowers could carry out transactions without the participation of third parties). Later they announced that they were ready to take it to the next level of the DeFi ecosystem. Thus, Aave was one of the first DeFi lending protocols. ETHLend is now a subsidiary of Aave. Nowadays, this platform supports lending of 22 different cryptocurrencies including USDT, USDC, ETH and LINK. And its own token AAVE allows any holder to get a discount on borrowing funds.

As one of the earliest projects in the DeFi space, AAVE has contributed greatly to it. For example, a distinctive feature is the ability to take out an urgent loan without collateral. This allows people with no assets trying to make profit with DeFi. Apart from this, the platform has many other advantages.

We invite you to consider the AAVE token in detail.

In accordance with information on CoinMarketCap:

As you already know, back in 2017, the ETHLend project was created. During the ICO, the project raised about $16 million through the sale of LEND tokens. In September 2018 the rebranding of the ETHLend project to Aave happened. However, it wasn't as well known until 2020, when DeFi caused an incredible stir. The name of the token was changed from LEND to AAVE in October 2020. The creators of the platform made it possible for all LEND token holders to exchange them for AAVE tokens at a rate of 1:1. Since then, there has been a rapid rise in the value of this cryptocurrency. There is no roadmap on the platform's official website, but we can see that the project is full of ambitions. In 2021, the team launched a new Aave Improvement Proposal 7(AIP-7). This made it possible to increase Safety Incentives to 550 AAVE per day and officially activate slashing. As a result, instead of 400 AAVE per day, all participants have the opportunity to get 550 AAVE per day as a reward.

Ex-entrepreneur at the Messari analytical company, Qiao Wang, called DeFi tokens "the investment opportunity of the decade." According to him, missing out on the opportunity to invest in these coins is the same mistake as not buying Bitcoin in 2013 or Ethereum in 2015.

Here's what crypto enthusiasts are tweeting about the AAVE token discussing its possible growth in value in the future. Many of them appear to be optimistic in their forecasts. 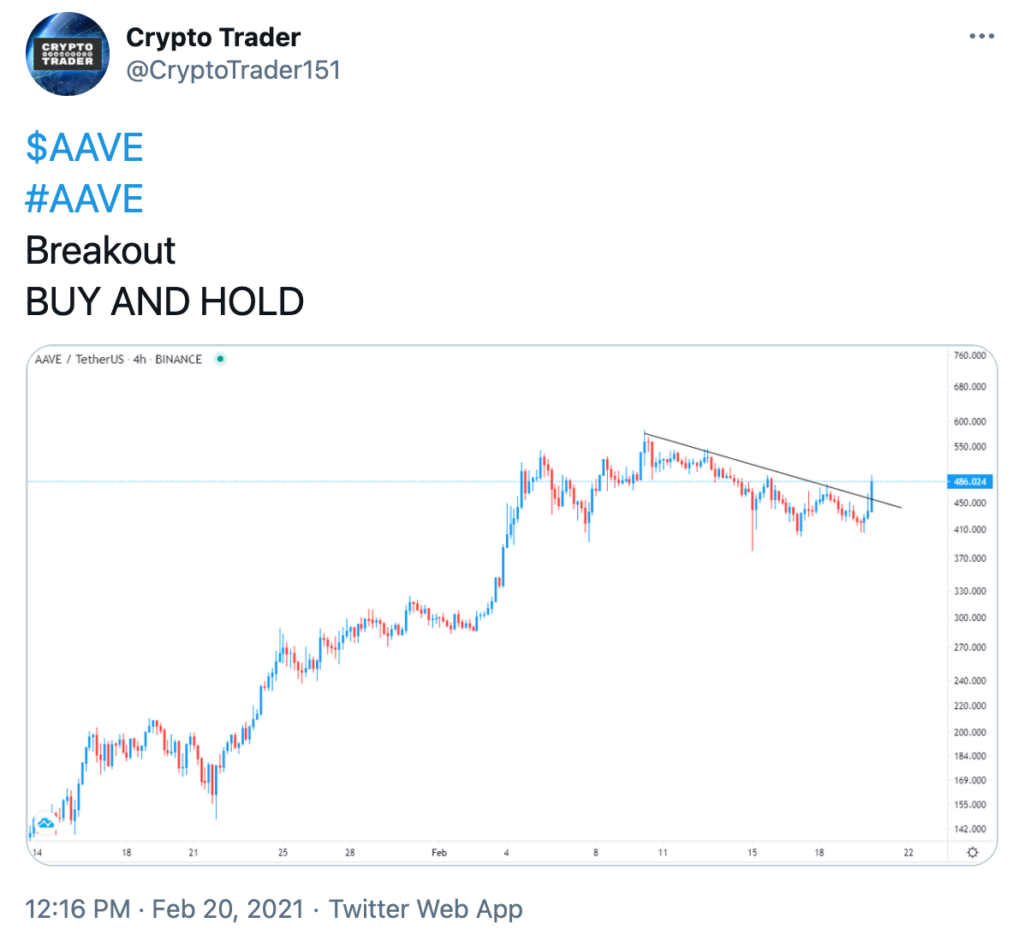 As we can see, many assume that the increase in the price of this cryptocurrency will reach very good indicators. Users see the potential here. 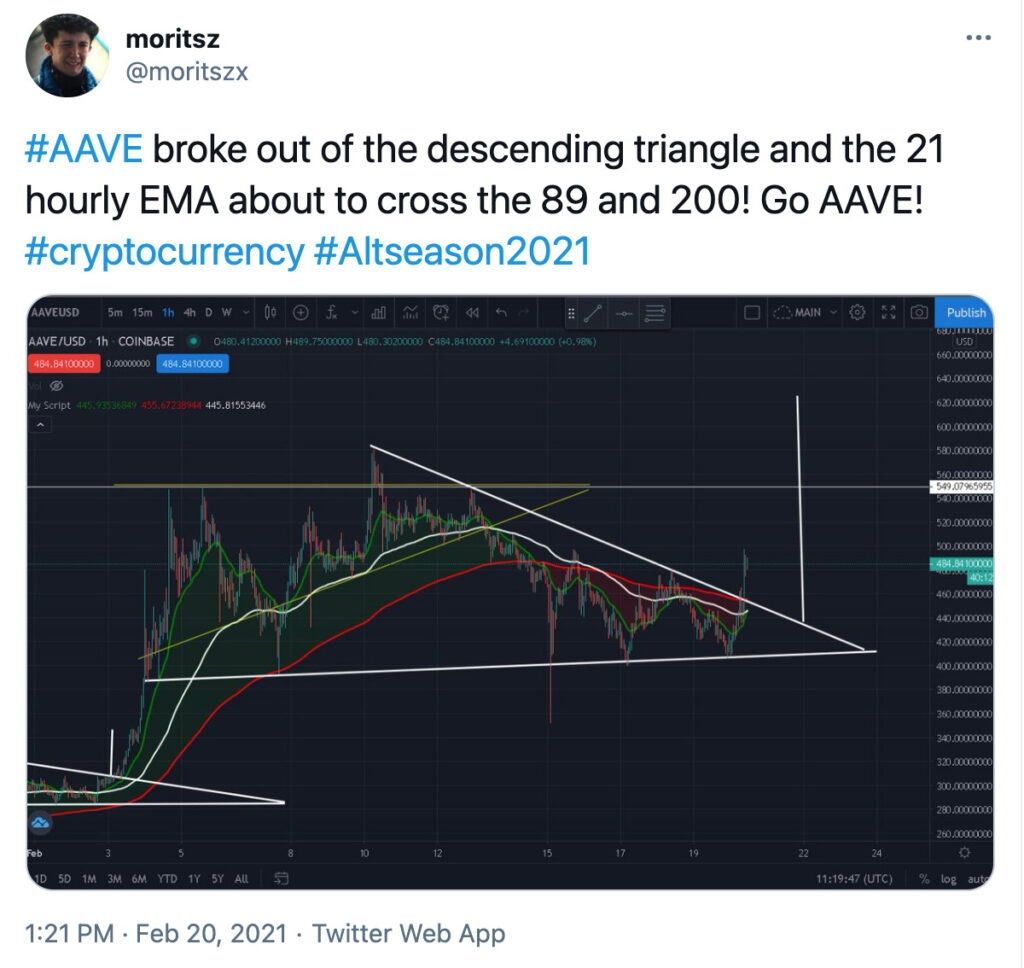 Of course, there are also people who make pessimistic AAVE price predictions. 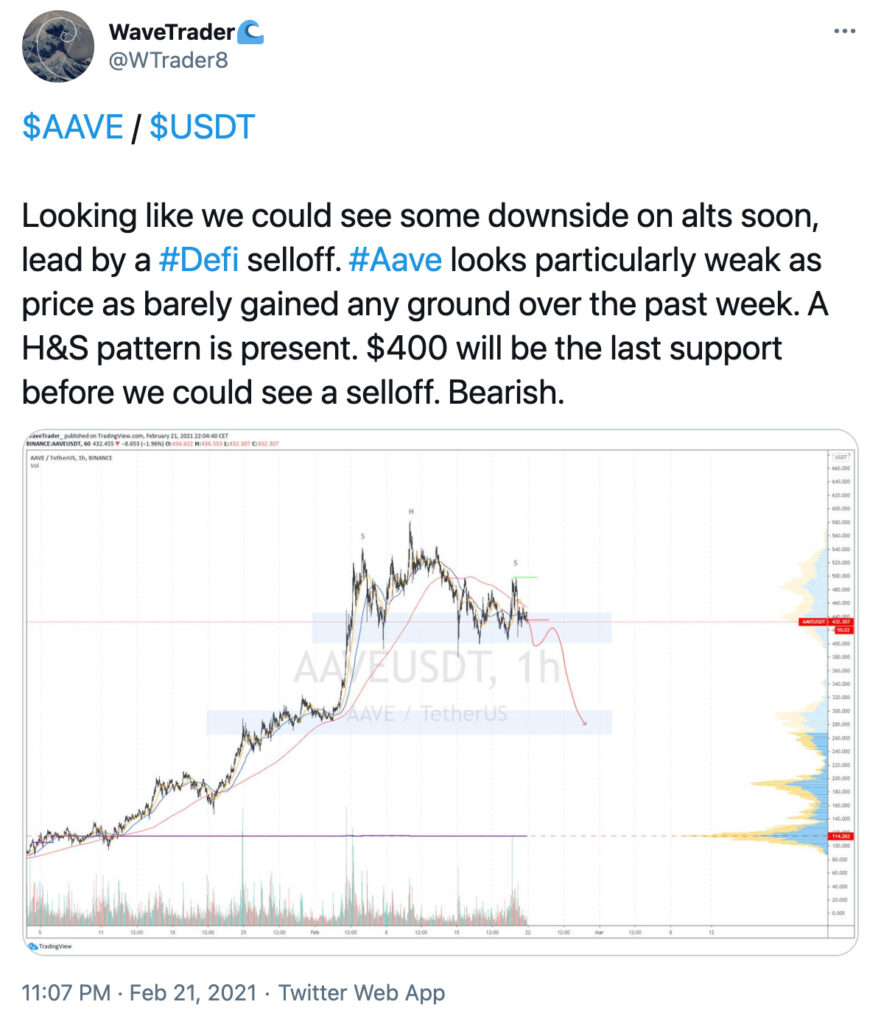 Back in 2020, Luke Martin (crypto trader) believed that one of the protocols that would perform well in 2021 would be Aave. And in January 2021, he confirmed his words with the following statement on his Twitter: “Alt market is going absolutely insane. $AAVE $UNI $SUSHI $DOT leading the move.”

In turn, DigitalCoinPrice suggests that the maximum that can be expected in 2025 is $1,221.95 per token. At the same time, here experts believe that the price may fluctuate slightly.

CoinPriceForecast estimates that the period 2025-2030 will bring significant increase. In their opinion, by the end of 2030, the price of one AAVE token will be approximately $109,553.

Although the AAVE cryptocurrency is considered quite new on the market, it now ranks 17th in the list of the largest cryptocurrencies. But long-term forecasts of the price of this token cannot be absolutely accurate due to the impossibility of taking into account many factors that may affect future growth or decline in prices.

Like any other, the AAVE cryptocurrency was either falling in price or rising, showing its historical minimum and maximum.

From November 2020, AAVE began to show active growth after the change of the LEND ticker to AAVE and the buzz around the DeFi projects. As a result, the token increased in price by 105% to $52.

A well-known billionaire investor named Mark Cuban did not initially support cryptocurrency or anything related to it. He even warned people to be careful with such digital assets. However, he recently invested in cryptocurrency himself, because he believes that such digital assets and goods are the future of business. He recently posted the following statement on Reddit: “I own AAVE and Sushi, along with Eth, BTC and LTC.” After his words, the token price reached its record high exceeding $500.

In February 2021, the price of the AAVE cryptocurrency reached its all-time high and then showed a decline again.For the last week, the token has kept price hikes in the range of $ 315-480.

With the advent of Decentralized Finance (DeFi), many new platforms have joined the digital space. However, not all of them attract attention and are famous. Aave is one of the platforms that consumers trust. In addition, it takes the DeFi ecosystem to the next level and brings more intuitiveness and ease of use to the market.It initially attracted attention as one of the first protocols that allowed users to lend, borrow, and receive interest on crypto assets. The breakthrough features of the Aave project are term loans, and the fact that the platform does not store user assets directly, thus providing peace of mind to consumers and retaining ownership of their assets. Thus, Aave has established itself as a driving force for innovation in the Crypto World.

We've prepared the BAKE token price forecast for you

We've prepared the BAKE token price forecast for you