Anchor Protocol is one of the Terraform Labs projects. This protocol provides users with a stablecoin savings product and a stable interest rate for savers. The whole principle of the Anchor platform is that it uses the block reward, which is accumulated on the assets that the client provides for borrowing stablecoins.

The platform has its own ANC governance token. Users can deposit (or stake) these tokens to create new management polls in which holders (who have staked ANC) can vote. ANC is designed to capture a fraction of this project's returns relative to Anchor's Assets Under Management (AUM).

Anchor Protocol is a very young project as it was created in March 2021. The main goal of the project is to make it the gold standard for passive income on the blockchain. We can see how the Anchor Protocol team is moving forward very confidently. There is no roadmap of the project for the future yet.Therefore, we invite you to take a look at the protocol changes and improvements since the beginning of 2022: 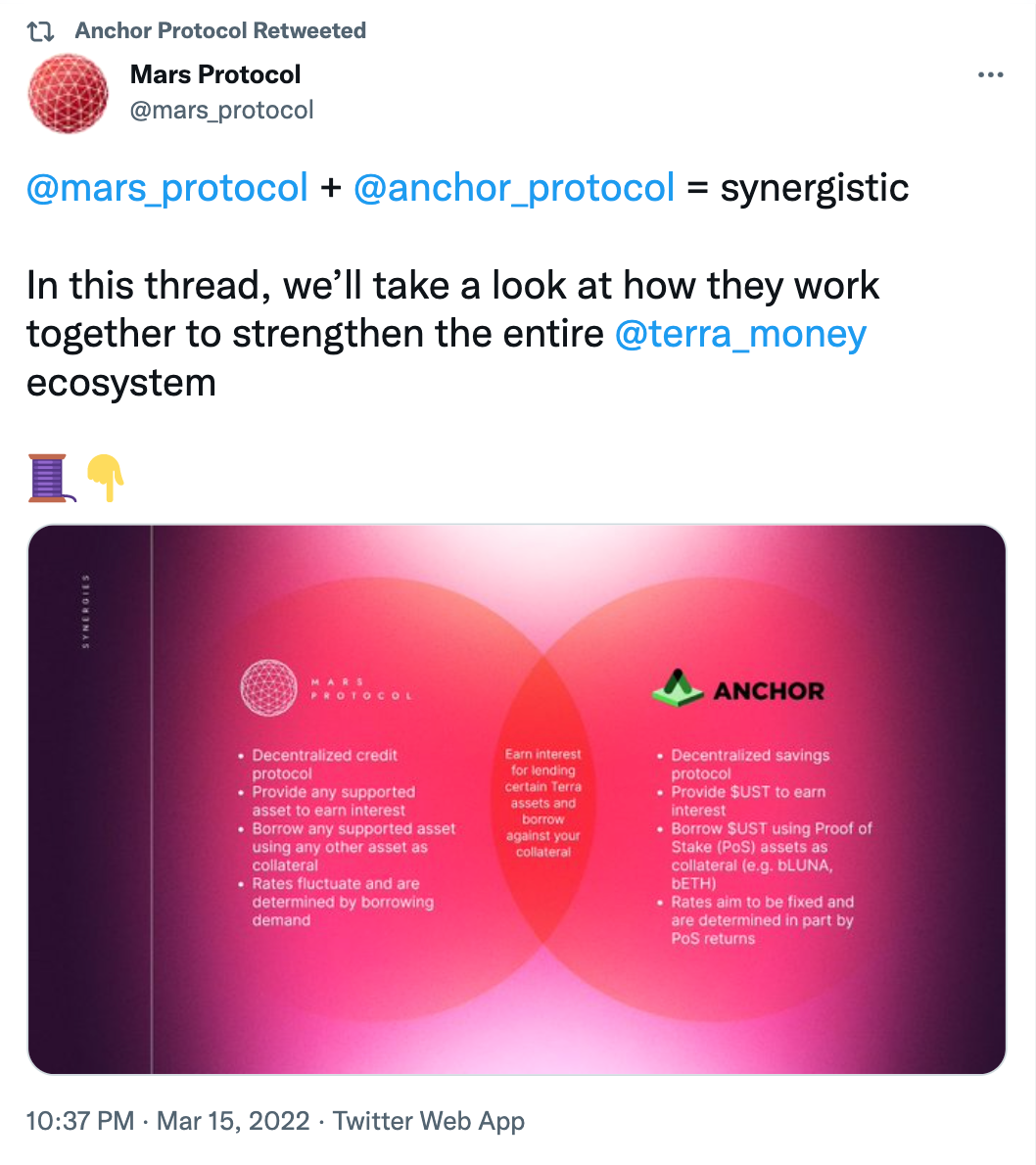 Let's follow the updates of this project further, there are a lot of innovations ahead.

You can see the opinions of crypto enthusiasts below. Most people are excited about the ANC crypto asset and make optimistic price forecasts for the near future. 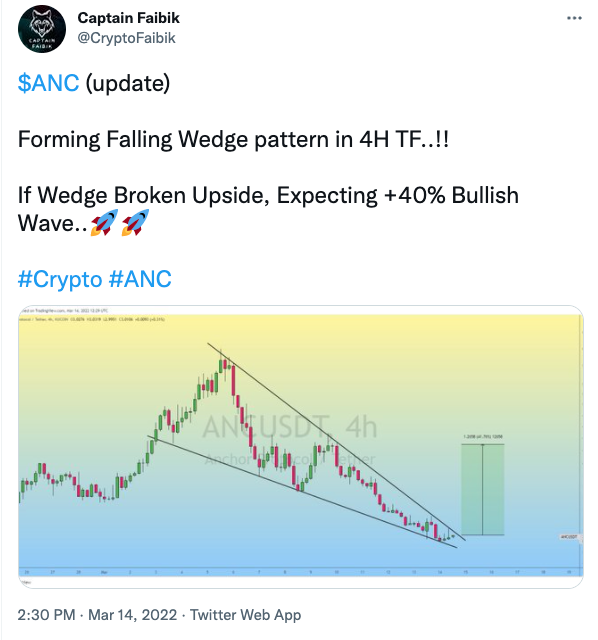 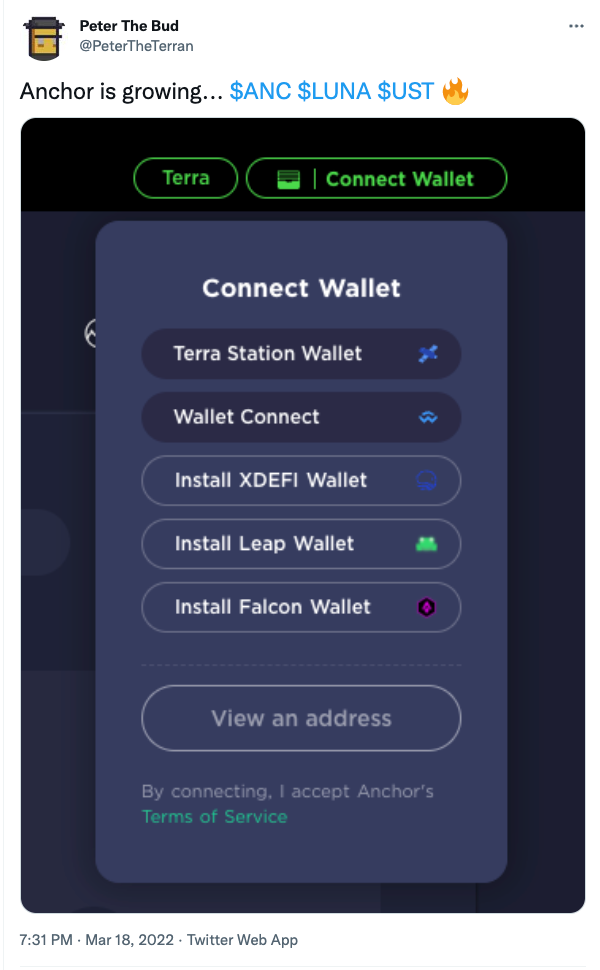 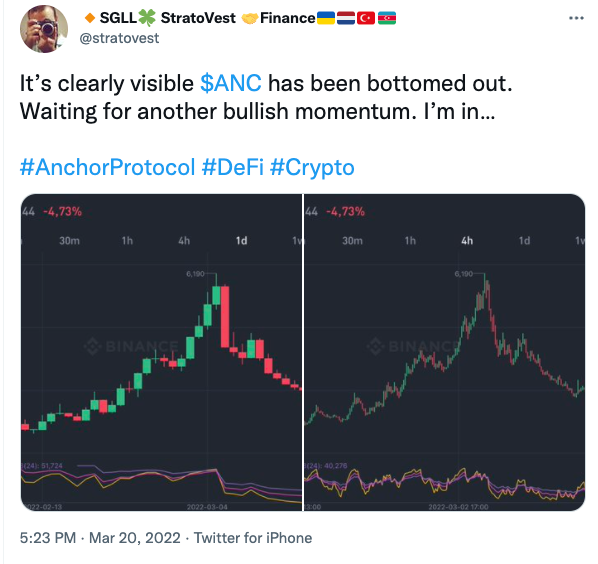 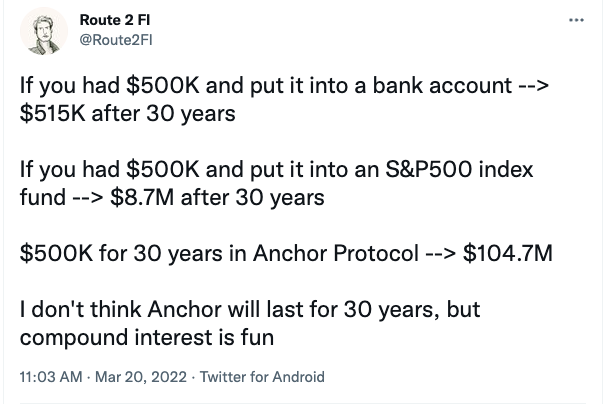 It is worth noting that some express fears and doubts about the safety of their assets in the event of possible hacker attacks or a market crash.

Experts from the TradingBeasts service make a forecast for the ANC price 2023, in which the maximum for the year is $5.3, and the minimum is $2.2. WalletInvestor analysts predict that ANC will start 2023 at $2.65, and by the end of the year, the price will gradually decrease until it reaches $0.8. The maximum ANC token price for 2023 predicted by DigitalCoinPrice will be $4.27 and the minimum will be $3.47.

The maximum ANC price in 2030 will be $12.41 and the minimum will be $11.53. Such predictions are made by analysts of the DigitalCoinPrice service.

The IDO of the ANC cryptocurrency was launched on March 16, 2021, and the opening price was $0.05. Already by March 20, the price jumped to $7, but then closer to March 25, it fell to $4.5. The price of the ANC token fluctuated until mid-May of the same year, when it was around $5. Volatility in the cryptocurrency market greatly affected the price of ANC, in addition, problems with congestion led to the rejection of many transactions and on May 20 the price dropped to $2.6. Only in mid-August 2021, the price of the token was able to rise again and amounted to $3.6. Minor jumps and drops in the price continued until January 2022. And on January 28, the price of ANC hit its all-time low of $1.27.

In February 2022, Terraform Labs contributed 450 million UST to the Anchor Protocol reserve. After that, the price of the ANC token began to grow very rapidly and already on March 5 it reached almost $6. 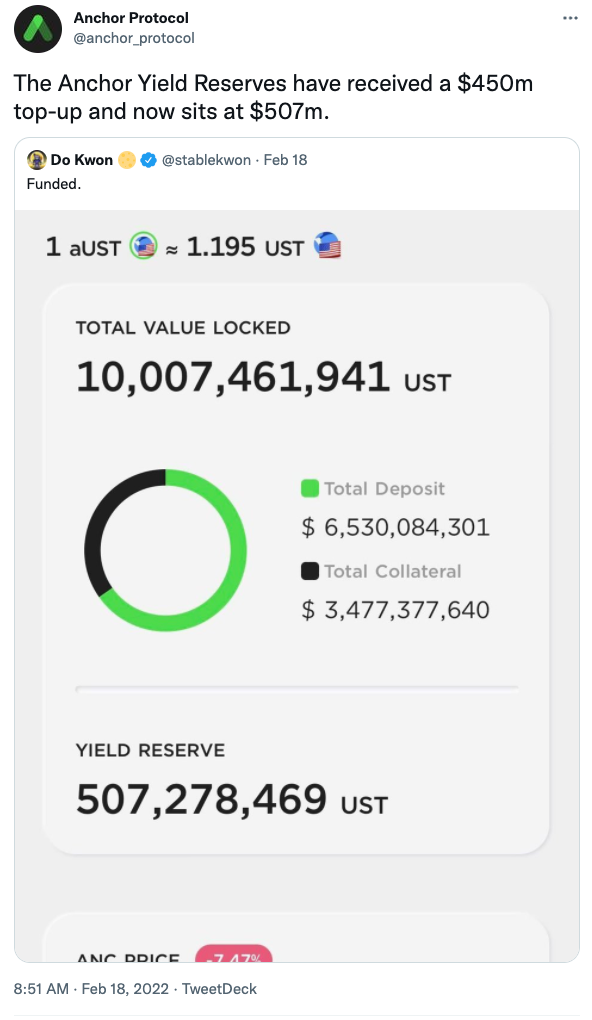 This was followed by a drop in the price of ANC to the level of $2.57.

As the DeFi space is still growing and attracting more people, this could be the perfect time to implement a solution like the Anchor protocol. This project offers a completely new approach to providing profitability in a decentralized protocol - based on the real rewards of Proof-of-Stake blockchains. Thus, it gives unprecedented reliability and stability of earnings, although, it does not completely eliminate all risks. But fluctuations in returns become noticeably lower. The protocol passed audits from Cryptonics and Solidified, which confirmed the absence of critical vulnerabilities.

Learn more about the TWT token and its price

Learn more about the TWT token and its price