Ontology is represented as a fast, low-cost public blockchain that is aimed to bring decentralized identity and data solutions to Web3. The project was founded in 2017 with a help of the Chinese company OnChain, which has also created NEO, called “Chinese Ethereum”. In 2018, Ontology made its own network and since then it’s been working independently of the NEO blockchain.

At launch, Ontology decided to abandon the common idea of Primary Coin Placement (ICO) model. It used a Community Distribution Series and Airdrops instead. The ONT coin originated as a NEP-5 token on the NEO blockchain. This allowed the project to quickly find a balanced price, interested community, and helped the project to avoid further regulatory oversight.

The project roadmap is available on the official website. It contains the team’s goals till 2021 which includes the development of the whole infrastructure of Ontology and its own products such as ONT ID, ONTO Wallet, Wing Finance (a credit based cross-chain DeFi platform) and SAGA ( decentralized data protocol for cross-organization data exchange).

Talking about the plans for 2022 — the project is launching the EVM Fund aiming to support Web3 developers building on Ontology. It contains:

They also are upgrading the ID framework and launching a lot of online activities with their partners. All the monthly reports about Ontology updates are available on their Medium blog.

The Ontology project is actively posting and keeping in touch with their community through social media. Let’s see what their followers think.

Ontology has a wide worldwide community supporting the project and daily sharing its updates. The reputation is quite high considering the social media such as Twitter, Reddit and YouTube. 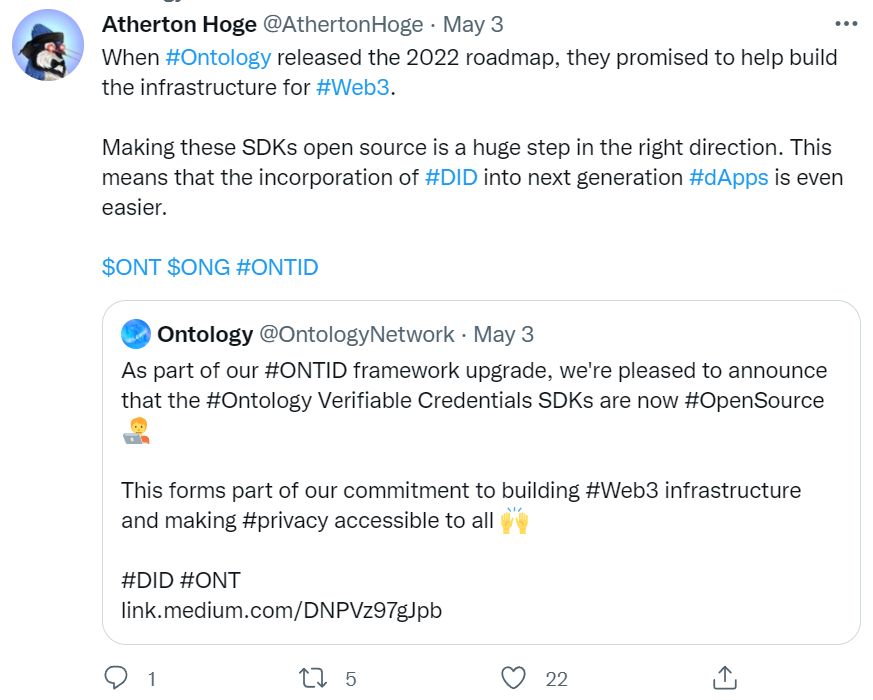 The community is mostly positive about the project and its goals. The coins are often mentioned in comments saying about the temporary low value which should go up sometime soon.

According to Tradingbeasts.com we can see an average price of $0.34 going up to 0.40 by the end of 2023. Digitalcoinprice.com provides a number of $0.42 for a coin. That’s also an average yearly price.

The analysts of Tradingbeasts.com say the price of ONT will be $0.41 for one coin. By December, it will go upwards and will cost $0.44. Digitalcoinprice.com prognosis gives almost the same value of $0.45.

We checked out Tradingbeasts.com for a 2025 prognosis and noticed the slowly increasing price which will amount to $0.53 by December. Digitalcoinprice.com provides the same average price for ONT coin in 2025 and also predicts a fine increase of it upto $1.49 by 2031.

Right after ONT was listed on exchanges, it was worth $1.3091 and kept increasing throughout the year due to the community growth and the attention the project attracted. The highest price of $11.18 was reached in May, 2018. Back then, a large number of updates were implemented into Ontology. Considering its whitepaper, it was a year of intense development. The team has launched the MainNet official website, ONTO Wallet, and published the Triones consensus system. In 2019, the price went down to an average of $0.45 and didn’t go up anymore until 2021 when the cost of 1 ONT coin was $2.69 a few times.

Nowadays the Ontology project seems to be an interesting ecosystem containing a lot of different products which practically could be useful for a modern society. Nevertheless, the price of the native ONT coin has decreased significantly in 2022, and like many cryptocurrencies, now stays in a stagnation period of time. However, Ontology has a loyal community ready to support the project and to wait for the coin’s price to rise. Taking in account that the team does not give up and continues working on the development of Ontology’s ecosystem, we can expect a good future to come. We will keep our eye on this project and share the latest updates with the SimpleSwap community!

What LINK price is expected

What UNI price is expected

What XMR price is expected this year

What LINK price is expected

What UNI price is expected

What XMR price is expected this year