Tezos is a network, which has its own XTZ crypto. Let's have a look at the history of this coin and Tezos price prediction 2020 - 2030.

The idea of Tezos appeared in 2014. Originally it was intended as an alternative to the Ethereum network. Although just like Ethereum Tezos is based on smart contracts, it was an attempt to make it more secure. Kathleen and Arthur Breitman, who established Tezos, were not new to this field. Both of them were involved in programming. This platform uses absolutely new language, it is called the Michelson language. XTZ cannot be mined. Nonetheless, users still can get a reward for being a part of the proof-of-stake consensus. All the stakeholders have an opportunity to propose a system upgrade, which may happen in case other participants approve it. This makes the system more democratized.

Amidst the Tezos blockchain features there is a big difference from the other networks. This developed protocol ensures the upgrade of Tezos blockchain without the need of a hard fork. This point is a real perk. Blockchain is rapidly adapting to new industry conditions. In comparison, Ethereum 2.0 develops almost a new network in order to make a shift to PoS. While Tezos has developed the ability to fix the existing network, it allows the Tezos network to continue operating and coexist in parallel with the upgraded Ethereum network.

Even though the way to the launch was not easy for Tezos, the coin received some appreciation. Since the launch in 2017 it has been stably growing. Let’s look at some detailed numbers.According to coinmarketcap.com:

Let’s take a look at some important point in the development of Tezos. Tezos Betanet Launch happened in June, 2018. Mainnet Launch happened a little bit later, in September, 2018. All the betanet transactions were saved. A major upgrade happened in May, 2019. The Nomic Labs developer group proposed a so-called Athens upgrade. What we know now as Athens upgrade actually was Athens A. Athens B did not get enough votes. Athens A suggested to lower the roll size from 10 000 to 8 000 XTZ and to increase the gas limit. The next update was proposed in October, 2019. It was called Babylon 2.0.1. This upgrade brought in a few significant changes. First of all, it suggested a new version of the consensus algorithm. Then it simplified the process of smart contract development, and changed the delegation process. The last upgrade took place in March, 2020. The Carthage 2.0 upgrade was suggested by Nomadic Labs and Cryptium Labs. It was all about code optimization. It is supposed to allow users to run more complex apps. Since Tezos allows users to implement updates, it is believed that this feature will allow Tezos to become very adaptive to the market. That means that Tezos does not follow some plan of developing new versions of existing network. The developers’ plan is to create a network that will evolve according to customer needs.

In spite of the fact that Tezos is rather young, and has been struggling at the beginning, people see its future in an optimistic way. Let’s see what people post on Twitter about XTZ. 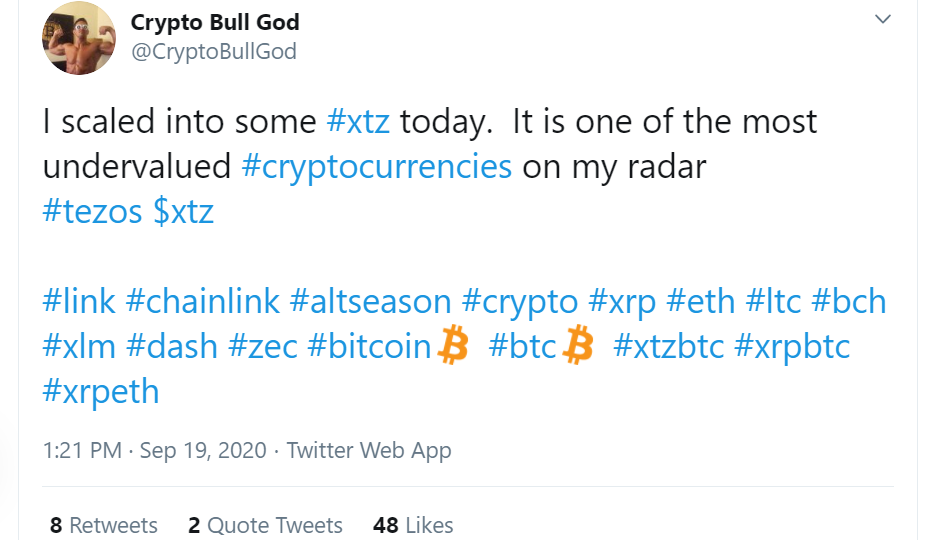 It is also well known that Vitalik Buterin has criticized Tezos a lot. Here is an example. 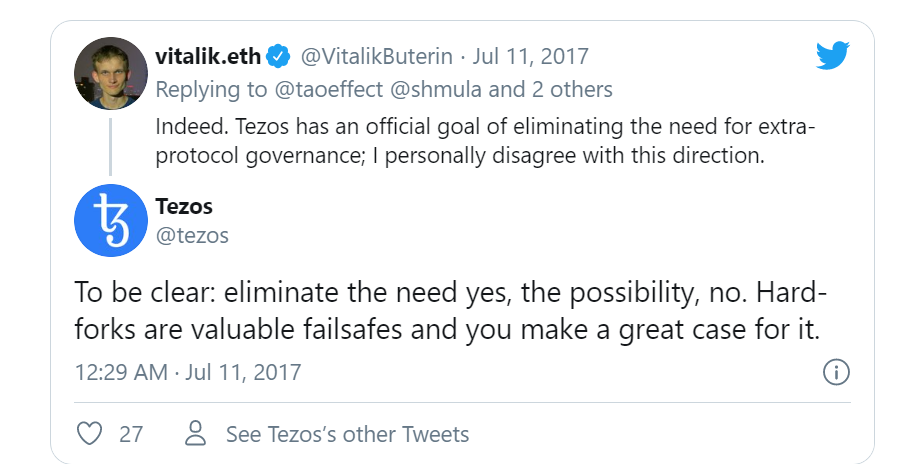 Here we would like to mention the opinion of the crypto trader, Luke Martin, about the XTZ price.

In February 2021 he posted on Twitter: “Never traded $XTZ before but now that it’s back above the monthly it sure looks like it’s continuing uptrend. At new ath dollar price. Expect it to carry the satoshi price.”

Walletinvestor does not see the reason for Tezos’ price to go down. Thus, the forecast for 2025 is also rather optimistic. It expects the price to go up to $10.171 by the end of the year. Digitalcoinprice supports the upcoming trend and predicts that the price will go up to $6.22.

The XTZ coin price had its highs and lows. Let’s take a look at them.

Tezos started trading in October, 2017 from $1.66. The start was accompanied by the inner disagreements that had an effect on the XTZ price. It fell by about 60%. The next serious hit came because of the class action lawsuit from investors. Because of the late launch and obvious lack of development, some of them did not meet their expectations and wanted to get a refund. In spite of all the accusations, the price of XTZ grew up to $10.56 till the end of the year. XTZ started 2018 at the price of around $4-6. 2018 was the year when the testnet was launched. However it had some limitations, for example, it could not allow big transactions. Undoubtedly, this had an impact on the price. In December XTZ hit the historical minimum of $0.349233.The real rise started in 2019. Tezos participated in a very successful collaboration with a digital asset management company “Elevated Returns”. A real estate investment project became beneficial. Until March 2019 the XTZ price increased by 40%. The same year Coinbase started a service that rewarded people for using coins, based on the Proof-of-Stake algorithm. This support also had a good effect on the XTZ price. During the same year Brazilian bank “BTG Pactual” and “Dalma Capital”, the asset manager, started to use Tezor to conduct STO. Later Coinbase listed XTZ. All these events had a major impact on the XTZ price.

From the information above it can be seen that Tezos shows slow stable growth. It is very common for it to go down in price in the middle of the year and change trends until the end of the year. For those who go long on XTZ, it is a sign that temporary dips are not the reason to get worried. We hope that this article gave you a better understanding of Tezos development.

SimpleSwap kindly reminds you that this article is provided for informational purposes only and does not provide advice on investment. Always make sure you receive information from various sources before making an investment decision. All purchases and cryptocurrency investments are your own responsibility.

Find different opinions on the WTC token and its price

Learn more about the GRT price

Find different opinions on the WTC token and its price

Learn more about the GRT price