When the developers of DApps want to build an application, usually they have to compromise and choose between efficiency and software decentralization. As a result, blockchain applications do not always manage to achieve the balance they need. This changed when the Graph Network entered the game. The developers have announced a solution that allows the creation of powerful DeFi applications without sacrificing decentralization. According to the description of the Graph project, the platform created by the developers is a "level of indexing and queries in the decentralized network", which works as a link between DApps and various blockchains. This data query indexing protocol for networks like Ethereum and IPFS powers many applications in both DeFi and the broader Web3 ecosystem.The platform allows participants to batch requests into subgraphs (custom channels that provide API data for use by blockchains and DApps).

The platform supports Polkadot, Solana, NEAR, CELO blockchains. Such DeFi projects as Uniswap, Synthetix, and Aave should be also mentioned here.

The Graph project has its own GRT token. GRT is blocked by indexers, curators, and delegates to provide indexing and curating services on the web. This ERC-20 token is used to allocate network resources.

Let's take a closer look at the GRT token according to CoinMarketCap data:

The Graph was founded by electrical engineer Yaniv Tal, computer scientist Janis Pullman and roboticist Brandon Ramirez. After years of hard work, The Graph announced the launch of the mainnet in December 2020. The official website of this platform does not provide the classic roadmap. Despite this, back in October 2019, the developers published the "Future Work" section on their website. They described their plans for the future, but also noticed that this was not a guarantee of the path the protocol would take, because ultimately it depends on the stakeholders of the development.

One of the latest and important updates announced by the The Graph Foundation team is the launch of the Scalar microtransaction system for blockchain data providers. This system opens up new ways for Node Operators and Data Providers to make money from GRT request fees. Data providers can get paid directly to provide payloads for apps without paid access or ads.

The Graph project is very promising, as it tries to solve some important problems for crypto enthusiasts. Many people think positively about the project and make optimistic forecasts for its future.

However, the opinions of crypto enthusiasts differ, and some of them do not consider investing in GRT to be profitable. 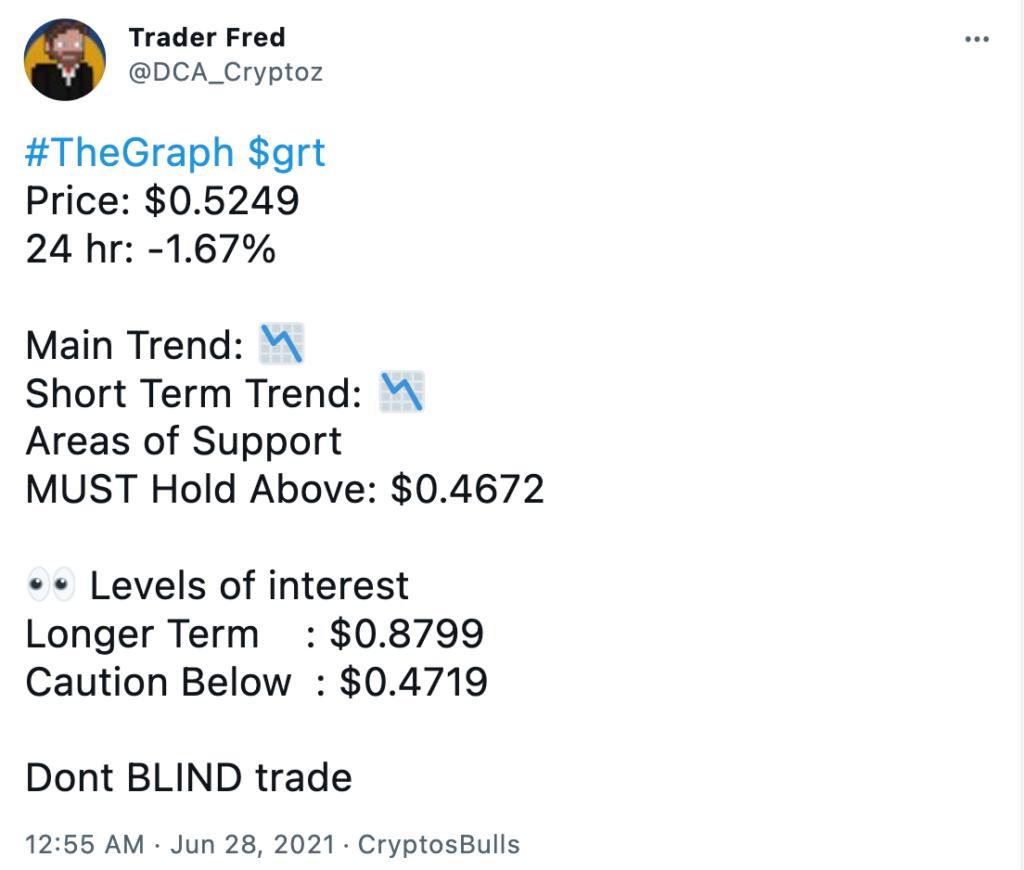 Let's see what GRT price predictions are provided by different services, so that you can analyze it in detail.

Slow price increases will continue in 2030. CoinPriceForecast experts suggest that 1 GRT token may grow to about $ 3by 2030, which means its slow but steady growth throughout the entire period.Despite this, some cryptanalysts believe that for the entire period up to 2030, The Graph can reach a maximum of $2 per token.

Like every cryptocurrency, the GRT token has had its ebbs and flows, although it has existed for just over six months.The Graph price started in 2020 with $0.1374. Today, the price of The Graph is around $0.5, an increase of approximately 76.5% since the beginning of the year. In 2021, this cryptocurrency started with a price of approximately $0.35. Later, the token began to recover, and on February 12, 2021, its ATH was $2.88.

A correction of the GRT price started when it reached the historical maximum. Every attempt to resume the rally was stalled and every weekly high was below the other. Since May 2021, the token price has consistently remained below $1.

The Graph indexing protocol organizes and optimizes data across different blockchains, allowing Ethereum application developers to manipulate data more efficiently. Also, thanks to the open API, access to decentralized applications increases. The tool can be used to search and retrieve data on the Ethereum blockchain, similar to the indexing tools that exist for traditional centralized databases.Since the Graph project was launched quite recently, let’s hope that it will develop and delight crypto enthusiasts with new updates and opportunities in the future.

Learn more about the PAXG price and its future

What YFI price we should expect

Learn more about the VRA price

Learn more about the PAXG price and its future

What YFI price we should expect

Learn more about the VRA price