The end of 2021 was marked by the cryptocurrency boom in Latin America, El Salvador, Argentina, Mexico, Venezuela, and Brazil became fast crypto-adopting countries. Undoubtedly, there is a reason for this. Let’s take a closer look at the situation in Brazil.

The financial situation in the country

25% of people in Brazil live under the poverty line. The minimum wages here are the lowest among Latin American countries.

Also, about 25% of the Brazilian population is unbanked. There are several reasons for this, including the lack of enough money and high fees for banking services. People also do not see the meaning in opening a personal bank account and they satisfy their needs by using one account by several family members.

In addition to this, there are a lot of places where there are no banks in the area. Then people are not able to use any services because of the distance.

At the same time, about 70% of adults own smartphones and use them for accessing the Internet. This country comes fifth in the world smartphone usage. Interestingly, they may use one smartphone to access the Internet by several people.

Why does the financial situation matter? Because it usually shows that people have an urgent need to search for alternative ways to make it through life. It works with Brazil as well. The statistics show that about 40% of crypto users in Brazil earn below minimum wage.

As of April 2022, Brazil is considered the leading country in crypto usage, including active crypto spending. This means that people are not just holding cryptocurrencies expecting it to grow, they use it as a currency to pay for goods and services.

Here is another perfect example to illustrate how urgent cryptocurrency is for the country. The largest digital bank in the country, called Nubank, offered its customers a crypto trading platform. It was launched in June and just one month after it started it was able to reach one million users.

The Brazilian government has not yet issued crypto-specific legislation or regulations. However, there are a number of laws that consider cryptocurrency. Let’s look at some of them.

First of all, none of the virtual currencies are considered to be real currencies. There are two laws that describe the local currency as only legal currency in the country (Decree-Law 857-69 and Law 10192/01). According to Law 10406/02 cryptocurrencies are assets.

ICOs are not forbidden by any law, but they may become a subject to the Capital Markets Law and the Brazilian Securities Exchange Commission (CVM) regulatory framework.

Pretty much the same is happening with the anti-money laundering rules. There are no specific regulations for cryptocurrencies, but the existing anti-Money Laundering law may be applied in some cases.

In 2020 the lawmakers proposed a project of legislation that could be used to control virtual currencies. It is important to notice that it has not been implemented yet.

Currently the Brazilian Congress is revising the existing laws and regulations to adapt them to the increasing interest in cryptocurrencies. So far there is a proposal that is meant to allow Brazilian citizens to use crypto for payments and at the same time it should protect users’ private keys from being taken by the courts. This bill will also change the existing status of cryptocurrencies from ‘virtual assets’ to ‘financial assets’. Since it will be possible to use crypto as a means of payment, it may also become possible for courts to freeze accounts for some reasons or require crypto assets as fine payments in case there is nothing else that can be used. However, this part is still under consideration. 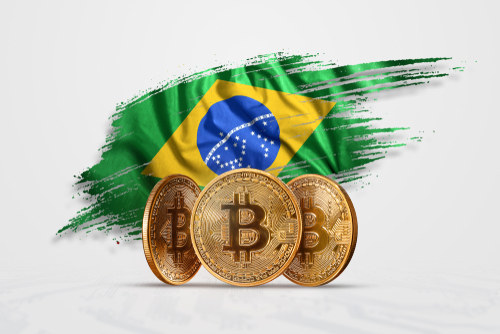 There are no specific tax regulations for cryptocurrencies, nonetheless, sometimes the Brazilian tax authorities provide guidance for crypto users. The most common requirement is to declare virtual assets, including cryptocurrencies, in income tax statements and also declare capital gains derived from the sale of the mentioned above assets.

Generally speaking the government does not express any loud concerns. However, from time to time they do inform citizens about the potential risks connected with crypto ownership and trading.

In 2017 the Brazilian Federal Reserve Bank issued Notice No. 31,379 alerting citizens about the risks coming from the custody and trading of virtual currencies and also reminding them that the Bank has no control over such operations.

As it can be seen the unfriendly financial climate in the country stimulates people to look for alternative ways to stay afloat. Lately cryptocurrency has become a lifeboat for people in Latin America, and in Brazil in particular. It helps to deal with high inflation rates and long-distance problems. It enables people to use a kind of financial services that cannot be provided by banks for lower fees and less time.

An article for those who've decided to become a yield farmer

Read this article to learn more about regulation and use of crypto in South Korea!

Favorites in the cryptocurrency market

An article for those who've decided to become a yield farmer

Read this article to learn more about regulation and use of crypto in South Korea!

Favorites in the cryptocurrency market