Crypto millionaires. Are they real?

Initially, many cryptocurrencies did not exceed the price of a few cents, but the gradual increase in the rate allowed forward-thinking investors to significantly increase the value of assets and become crypto millionaires. Few people discuss their wealth because they do not want to get too much attention, so information about the income is rarely shared publicly. In addition, digital wealth can be stored in multiple separate wallets. Despite this, we found some information about those people who significantly increased their fortune thanks to the growth of Bitcoin and some altcoins.

Even nowadays, when many cryptocurrencies have reached incredible prices, many famous people are contradictory about them. For example, the creator of Microsoft and one of the richest people in the world, Bill Gates, is neutral towards cryptocurrencies, although he understands the importance of digitalization.

He told about this in an interview with CNBC in February 2021: 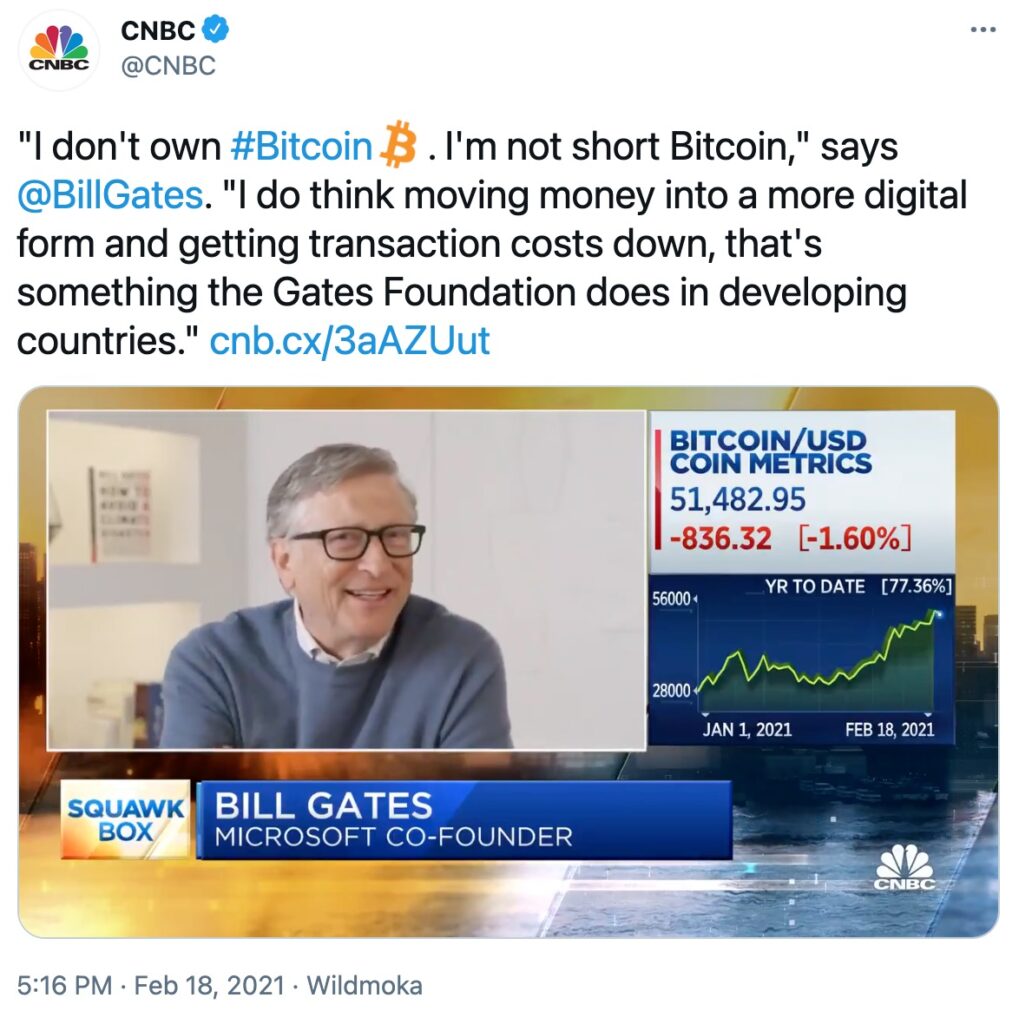 Today, many huge corporations are investing in Bitcoin too, as they see great potential in it and believe that it will be a significant investment for the development of the companies. For example, MicroStrategy Incorporated (MSTR) is one of them. As of February 24, 2021, the company owns a total of approximately 90,531 Bitcoin, which was bought at a combined purchase price of $2.171 billion. CEO of MicroStrategy Incorporated Michael J. Saylor said: “The company now holds over 90,000 Bitcoins, reaffirming our belief that Bitcoin, as the world’s most widely-adopted cryptocurrency, can serve as a dependable store of value. We will continue to pursue our strategy of acquiring Bitcoin with excess cash and we may from time to time, subject to market conditions, issue debt or equity securities in capital raising transactions with the objective of using the proceeds to purchase additional Bitcoin.”

Tesla also became a rather striking example of investing in Bitcoin. In an annual report filed with the US Securities and Exchange Commission (SEC), Tesla reported a $1.5 billion investment in the first cryptocurrency. In February 2021 this news caused the price of Bitcoin to rise to a new all-time high of $44,968 (at that time). Tesla also pointed out that it can acquire and store digital assets in the long term. In addition, Elon Musk announced the start of car sales for cryptocurrency:

Unfortunately, no one can name the exact number of holders of more than a million dollars in cryptocurrency. But there are a lot of such people. Of course, it will not be possible to cover everyone at once, but we have compiled a cryptocurrency millionaires list, whose fortunes are growing at an incredible speed.

Let's start with the people who own Bitcoins.

Satoshi Nakamoto is a pseudonym for the person or group of people who developed the Bitcoin cryptocurrency protocol and created the first version of the software in which this protocol was implemented. Bitcoin's mysterious creator is considered to control about 1 million coins, most of which were mined in the earliest days of cryptocurrency when only a few programmers knew it existed. BTC that Nakamoto owns, have never been spent or transferred. The current market value of these assets is about $58 billion. Even if there are a thousand people behind the project, they are all millionaires now.Roger Ver started investing in Bitcoin in early 2011. According to various sources, he owns between 130,000 and 300,000 BTC, which at the current exchange rate is between $7.5 and  $17.4 billion. At one of his performances, he says that in the long term, the most useful coin will be the one that will be used the most. It will have the largest market capitalization, liquidity, and the largest user base. Robert Ver founded MemoryDealers at the age of 19. And this company became the first in the world to start accepting Bitcoins for payment. Also, Roger became the first person in the world to invest in Bitcoin startups. Since then, Roger has devoted all his time to Bitcoin and blockchains.

Matthew Roszak bought his first BTC in 2012. Today, he is co-founder and chairman of the blockchain startup Bloq, which works with Citigroup and Discover. According to Forbes, his cryptocurrency capital today exceeds $1 billion, although just a year ago his fortune was estimated at $300 million.

Here's what Roszak says about the first cryptocurrency on his Twitter:

Michael Edward Novogratz is the founder and CEO of Galaxy Investment Partners, which specializes in investing and developing cryptocurrency-related services. In 2013, he personally invested $7 million in Bitcoins and then used those assets as seed funding for Galaxy. According to information published in September 2020, Forbes estimates Galaxy's crypto assets at $621 million, which is 300% more than was in May of the same year. Novogratz owns 77% of the company. This is not to mention the cryptocurrency which he may personally own.

We have also compiled a few examples of altcoin millionaires for you and now we invite you to look closer at these people and their achievements.

Changpeng Zhao is CEO of Binance and BijieTech, former CTO of OKCoin, and founder of Fusion Systems. He is also the creator of the Binance cryptocurrency. The value of his BNB coins and his business is estimated at $1.9 billion.

Vitalik Buterin is the inventor of Ethereum, which is the second largest cryptocurrency network and is valued at $123 billion. He is better known for his academic and social interest in cryptocurrency than for being an investor. But this does not mean that he was unable to make money on cryptocurrencies. He now owns more than 333,000 Ether coins worth about $666 million. A year ago, these same digital coins were worth only $53 million.

Chris Larsen is an American investor known for setting up several joint startups in Silicon Valley. In 2012, he became a co-founder of Ripple Labs, Inc., where he is an Executive Chairman of the Board of Directors now. In addition to the company's assets, in 2018 Forbes reported that he owns 5.2 billion XRP.

Obviously, the data about crypto millionaires cannot be completely accurate, as not everyone freely discusses their wealth. However, just think about it, 15 years ago no one could even imagine that a cryptocurrency would appear and become so popular. And today, Forbes is compiling lists of millionaires who have made their fortune thanks to the rise in the price of such currency!

What Can Be Bought With Bitcoin in 2022

BTC as a suitable payment method for goods and services

What Can Be Bought With Bitcoin in 2022

BTC as a suitable payment method for goods and services