How The XRP Price Was Changing

Ripple appeared as a decentralized interbank network that allowed to conduct transactions using most fiat money as well as precious metals. In such a case, the transfer occurs instantly. The aim of inventing the Ripple network was the emersion of a new method of calculating for the banking system, the development of an alternative system of cross-bank transfers with minimum commission.XRP is a digital asset for payments, an internal Ripple platform’s currency. XRP, unlike some other different cryptocurrencies, has a little similarity to Bitcoin. Looking at the other cryptocurrencies one can say that they are more secure and anonymous or use smart contracts, then XRP is something completely new. XRP was not made as a substitute tool of payment, nor as an alternative to traditional fiat money and the integral banking system as a whole. With regard to capitalization, XRP takes the third place after Bitcoin and Etherium.

The history of Ripple started in 2004 once Ryan Fugger got started working on the RipplePay, launching its first version in 2005. RipplePay was gradually developing and in 2011, the creators of Ripple made a decision to create a decentralized network. There should be no use of mining, while the speed should be much better than Bitcoin has. In the meantime, the prospective director of Ripple Labs - Chris Larsen, joined the development team. OpenCoins - the affiliated company of RipplePay was started in 2012 and was engaged in the process of the payment functionality improvement.In 2013, it was renamed as Ripple Labs. The old team left the project, and the new director Chris Larsen changed the goal of the company, repurposing it to work with banks. And in 2014, initial success was achieved in this direction - the first bank began working with them. The success didn’t stop here and continued to progress so in 2016 the company received more than $55 million investments; agreement to start cooperation was signed with the National Bank of Abu Dhabi. According to forecasts, in further years, a growing number of banks will sign agreements with Ripple and adopt the technology.

Let’s look through how the XRP price was changing (max rate): 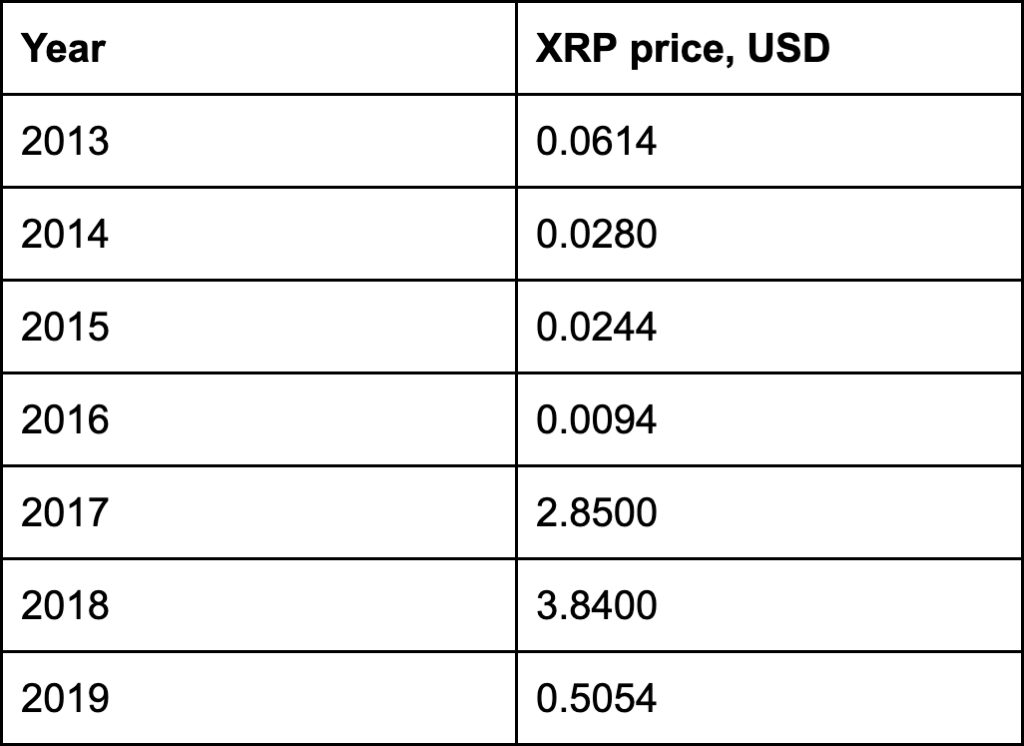 The dynamics of XRP largely repeat the changes in the rate of BTC. The XRP rate is still much dependent on trends in the entire cryptocurrency market, in other words, on the behavior of BTC. 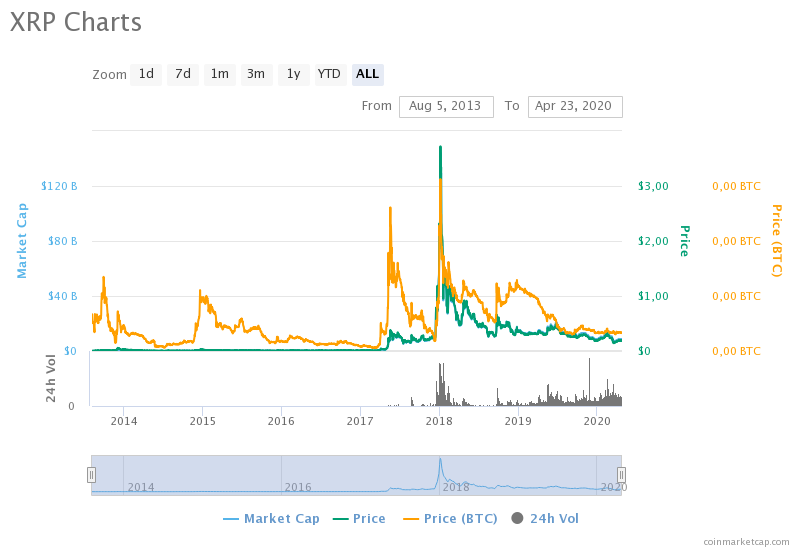 From its founding to 2015 the development team worked on product improvement, marketing managers were responsible to guarantee the product its place on the market, SMM and PR agents made the brand more famous. But there were no concrete results or any loud statements regarding XRP price prediction during this period.

XRP has been on the market since February 2013. As we can see from the CoinMarketCap data, on the first day of public trading on August 4, 2013, the XRP price was $0.005882.From the moment of the project launch and up to January 2015, there were no serious jumps in the cost of XRP. The cryptocurrency just began to exist, and its creators took the first steps to popularize their product. So, the venture fund Andreessen Horowitz and the equally large Google Ventures became its first investors.As we know, the aim of Ripple included cooperation with financial institutions. Thus, the chosen activity vector has borne fruit. During these years Ripple started to collaborate with Fidor Bank, Cross River Bank, and CBW Bank as well as the Earthport payment system. Unfortunately, the popularization of the platform had no impact on the XRP price. However, we could see serious changes already in January 2015.So during 2013-2015, the XRP price went back and forth, fluctuating mainly in the range from $0.057 at the beginning to more modest values $0.005. As you can see, even then the XRP price could fluctuate ten or more times.

The first important leap occurred at the beginning of 2015. In January 2015, XRP price grew up to 2 cents per coin. Mostly, it is not the final price that matters, but the growth rate. In fact, XRP price has grown hundreds of times in a short period of time. In this case, the investments played a huge role, as well as affords to attract new partners. Obviously, the XRP developers did not stop here. In April 2015, Western Union announced its intention to work with Ripple. One month later, the Commonwealth Bank of Australia declared its willingness to begin using Ripple as an experiment in the implementation of intra-bank transfers. In total for 2015-2016, the company began working with several dozen banks of different countries. Nevertheless, the popularization of a promising network had an inconsiderable effect on the XRP price. If we look at the XRP history of 2015–2016, there will be some kind of volatility. However, it is extremely insignificant. In fact, during this period, 1 XRP cost 1 cent.

When 2018 started, forecasts for the XRP price was that it would rise to $1.

As we can see, 2017 became the year of the boom for many cryptocurrencies along with XRP. Fast-growth began at the end of March 2017. Having reached a temporary peak in early April, XRP price temporarily went down to jump up again at the end of the month and reached about $0.4 per unit by mid-May.At the end of 2017, XRP followed Bitcoin price fluctuations again and the price started to decrease. XRP price was fluctuating until the end of November 2017 over the range of approximately $0.15-0.25. In December 2017 - early January 2018, when BTC reached the price ceiling, a number of altcoins, including XRP, went into vigorous growth. At the most peaks on certain exchanges, the XRP price exceeded $4. But not the whole 2018 was so good for the cryptocurrency market. The XRP price with its increases and decreases over the year has pointed to the average price about $0.30.

Roman Guelfi-Gibbs (Trading Strategist) once said: “Ripple certainly has the potential to move up a notch in 2018, but I think it will be more likely in 2019. As the market observes more projects being coded in other algorithms such as XRP, ETH will likely take a backseat to the next big coin/token. It will take some time for the markets to digest this, so I am projecting 2019 to be the likely time for it to take place. Of course, with crypto, anything can happen, so watch closely.”

As for XRP price prediction for 2019, many experts were confident in the prospective success of the XRP price. In their opinion, in 2019, there could be a high chance of price fixing at around $1 or an increase to $5.At the end of June 2019, the cost of XRP rose above $0.45, and at some moment reached $0.5. However, then, until the end of the year, the XRP coin exchange rate steadily decreased, and the bottom was $0.18. Thereafter, in spite of the optimistic XRP price predictions, its price in 2019 was at average $0.3.

What do people say about the XRP price in 2020?

Arthur Hayes (BitMEX chief executive officer) has claimed on his Twitter: “Is it called Ripple, XRP, or dogshit? Who knows, who cares. It’s worth more than zero so it’s time to trade the USD pair on BitMEX. Boo-Yaka-sha!”

Peter Brandt (Classical chartist, Analyst) tweeted: “The diamond pattern has always been a top pattern among traditional markets. I suppose pattern might work for a bottom in crypto markets. If you want to know what a very clean diamond looks like, see $XRP … Pending a close above .3038 the diamond bottom will be completed with an initial target of .4691 $XRP.”

He also tweeted about a head-and-shoulders (H&S) pattern of XRP/USD on a daily chart: “It will be interesting to see if this H&S top plays out. If so, the target would be .2071. This Tweet poses a possibility. This is not a prediction.”

A review of XRP ecosystem development in recent years promises the best prospects for it in the future. But the principal advantage of the system, which distinguishes it from the others and substantiates a positive XRP price prediction, is the trust of banks. The value of XRP is supported by the fact that most financial institutions have taken it for a real monetary unit. According to some experts, the success of XRP will depend on the success of Ripple Labs. If Ripple technology is used and new partnerships are concluded, then the XRP price can grow up to 20 times. If the technology is not used, then a drop below 10 cents may be expected.

Undoubtedly, at the moment, XRP is one of the major promising cryptocurrencies amid long-term investments. The ever-increasing number of large international financial institutions and enterprises suggests the most favorable XRP price prediction for 2020.

This article does not contain investment advice or recommendations. It provides you with the analysis of XRP price through its history and has informational purposes only. Every investment and trading move involves risk. You are the only one responsible for making investment decisions.

Vitalik Buterin has announced the update concerning Ethereum 2.0. Find more details on The Scourge in this article.

Vitalik Buterin has announced the update concerning Ethereum 2.0. Find more details on The Scourge in this article.