Siacoin (SC) is a cryptocurrency of the project that aims to build decentralized cloud data storage. Along with that, Siacoin provides high-class security to its users, and in doing so Siacoin comes as a strong competitor to other giants in the cloud storage realm. Siacoin operates on the Proof-of-Work consensus algorithm, which works both on P2P and enterprise levels. The team says:

“Sia’s core goal is to bring decentralization to data storage. We want you to be able to store your data in a way that gives you full, exclusive control. We want to make sure you're protected against theft, censorship, and that you are never denied access to your data by hackers, miners, developers, or a government body. Your data belongs to you.”

Sia started off as one of the first non-financial use cases for blockchain technology. Being successful since the beginning of 2015, Sia still maintains leadership in this field on the crypto market.

The Siacoin project has its native coin called SC. It makes smart contract execution possible. There is no max supply for the SC coins, as it fuels smart contracts of the platform and their execution for the supposedly limitless amount of data that could be created and stored in the cloud.

According to Siacoin's whitepaper, the team aims to make a complete alternative to the existing storage solutions like Google drive, Amazon web services etc. The advantage Siacoin holds is the blockchain technology it’s based on and its decentralized nature.

The last roadmap the team published was available on Trello in 2018. Unfortunately since then there was not an official roadmap published. Anyway, the team is actively sharing the steps they make and news on their social platforms, making it clear that the team is moving along well and definitely making progress in their development.

As Siacoin is actively sharing their progress on social media, they also get attention around it. Not always it is positive, yet the SC community is quite supportive. Various traders regularly show their coin price diagram analysis expressing their belief that the SC coin will increase in price. 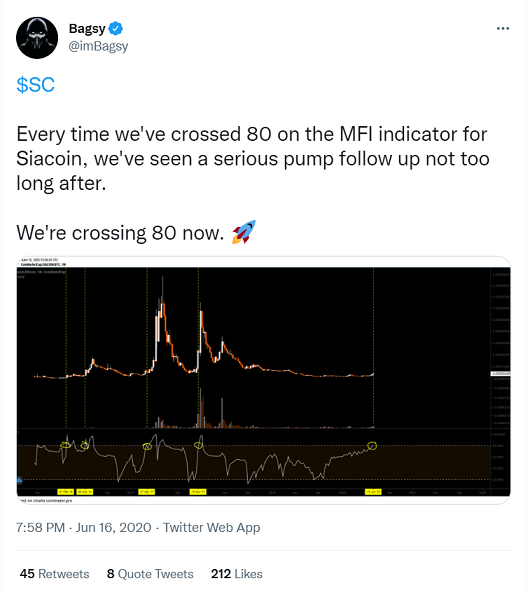 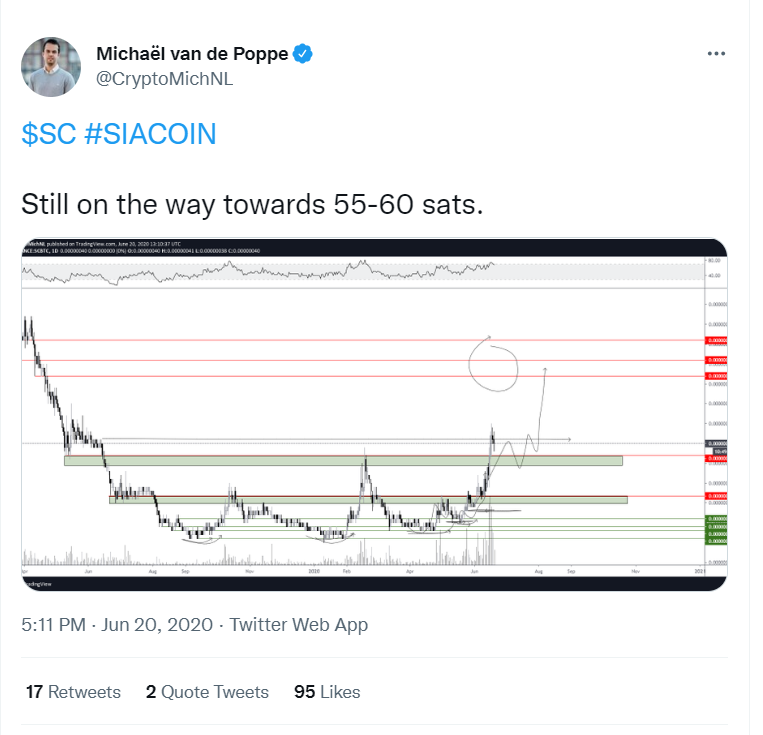 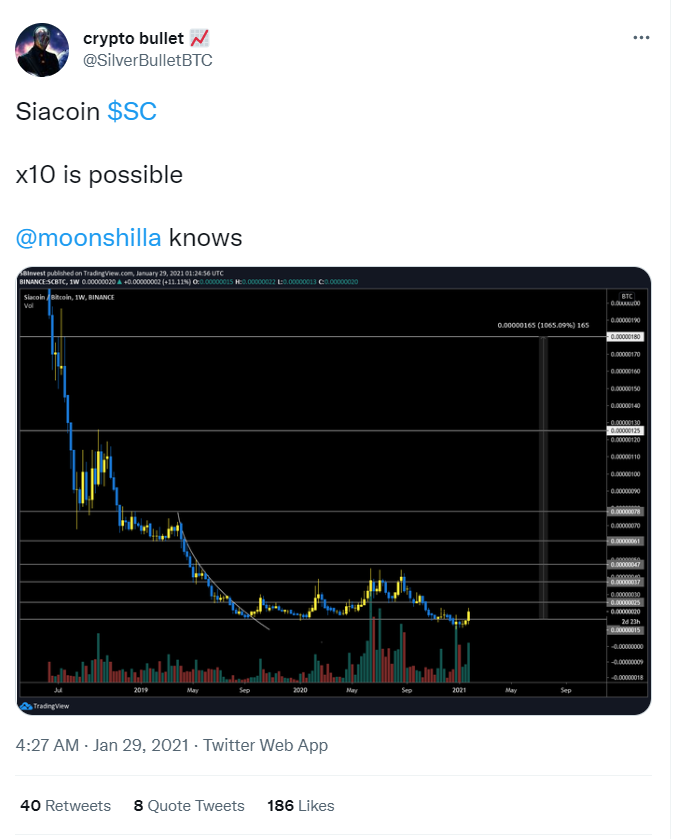 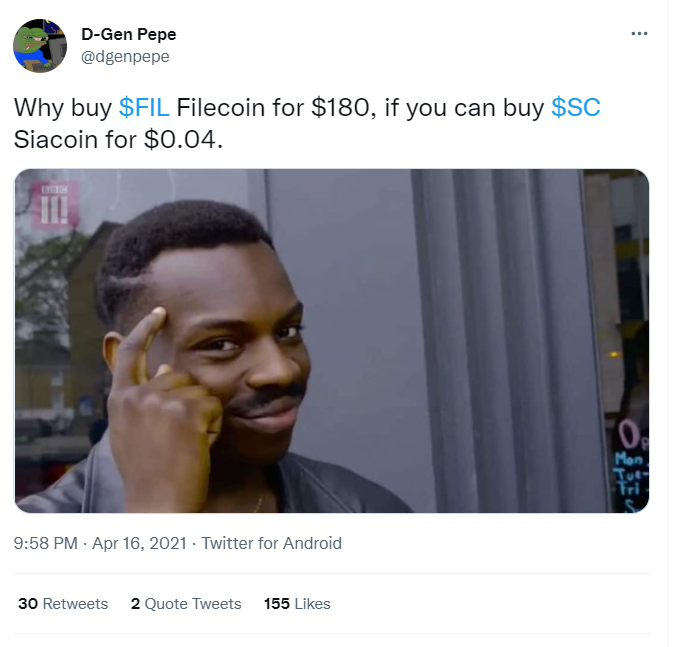 However, But no matter what the opinions are across the internet, it’s important to make purchases based only on your personal solutions and after thorough research.

The SC coin is located at the lower boundary of the Fibonacci gray zone. Only after entering the blue zone and confirming the breakdown of this level can we think of the further upward movement. 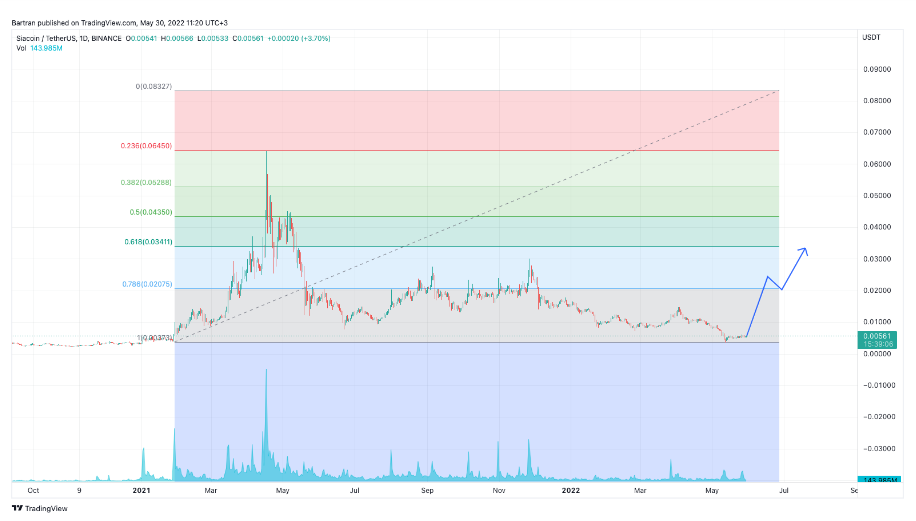 WalletInvestor has an SC coin price prediction $0.015 average throughout the year. DigitalCoinPrice experts have a little more pessimistic expectations. They believe SC to be around $0.007 all year. TradingBeasts share the same prediction: $0.007 all year, breaking the $0.01 mark at the end of the year.

WalletInvestor prediction for 2025 is more optimistic. The SC value is expected to increase to $0.02 in 2023 and almost reach $0.03 by the end of the year. DigitalCoinPrice suggests the coin will be worth an average of $0.01 the whole year but will decrease a little by the end of it. TradingBeasts experts make a forecast of SC being $0.012 in 2025.

According to the information from Coinmarketcap, Siacoin got its first recognition in August 2015. Its price was then $0.00004 and for almost two years it didn’t change.

Then in 2017 the first update “Capricorn” was released and the price began action. This update mattered because it freed users from keeping backup copies of their data stored on the blockchain. Along with this update Sia also revealed a blog post with the news that Siacoin mining hardware brought $4m revenue. This post also contributed to the SC price. It climbed from $0.001 on 30 April 2017 to a peak of $0.019 on June 22.

After that, till January 2018 the SC price stayed around $0.006, but then suddenly rocketed to $0.11 on 6 January 2018. It happened due to Siacoins’ rebranding and the new website launch. They were saying:

“This new site does a much better job of explaining our mission and goals and getting our users information they’ll need to succeed with our product.”

Despite this SC price then gradually fell. Afterward the utility token reached its other peak in April 2018. It happened due to the developers' announcement of the results of $1.5m funds it had raised from tokenized securities offerings. Then the price continued to slightly swing up and down for the next 2 years until 2020.

In 2021 when the token released its hardfork the price started to go up again. This hardfork was completed due to the need of changing algorithms and separating Siacoin from its parent company. When the rebranding was completed the price was fixed at $0.05 on 17 April 2021. Then the price was slightly changing in the course of time and dropped to the low of $0.008 on 24 January 2022.

Since then Siacoin has implemented a new tool called Embarcadero. It helps users to swap SC to another native token Siafund, which is used to share network revenue. As we see, the project is quite vibrant and has a great potential for future development.

Learn more about the WAVES price

Different opinions about the future of the ICP price

What XTZ price is expected over the next decade

Learn more about the WAVES price

Different opinions about the future of the ICP price

What XTZ price is expected over the next decade