Why is everybody crazy about NFT tokens?

It seems that the 2020 сryptocurrency boom contributed to another unexpected trend - NFT auctions. Since the beginning of 2021, NFT tokens are in the public eye because many artists and influencers have also paid attention to the assets. So in February alone, the NFT trading volume surpassed $340 million, which is more than the trading volume for the whole 2020. Even Playboy has recently stated their desire to enter the crypto art world with the collection of NFTs.The popular social networking video platform TikTok also announced its first NFT collection in October 2021. The name of this collection should be “TikTok Top Moments,” and the idea was to produce it in collaboration with famous NFT artists and TikTok’s content creators. However, the launch never happened and it seems that fake news was just used to attract an audience that is passionate about NFT.

By the way, a quick reminder: NFT is the abbreviation of a “non-fungible token”. They are the tokens that have marks of exclusivity and uniqueness because each of them is one of a kind and cannot be replaced or restored. So in the Crypto World NFTs act as a rarity which we are afraid to lose. This ill interchangeability makes NFTs just perfect for a proof of authenticity. It was quite predictable that investors would quickly figure out what NFTs are good for: generating revenue and acting as a tool of declaring the status.

A bit of history

One of the first NFT tokens was portraying Homer Pepe (Homer Simpson stylized as Pepe the Frog). In 2016 Joe Looney made it and in 2018 showcased it at the Rare Art Labs Digital Art Festival. Peter Kell bought it for $38,000 at that time. Now in March 2021 Kell published in his Instagram his farewell to Homer Pepe which he resold for 205 ETH which at the time equals $320,000. 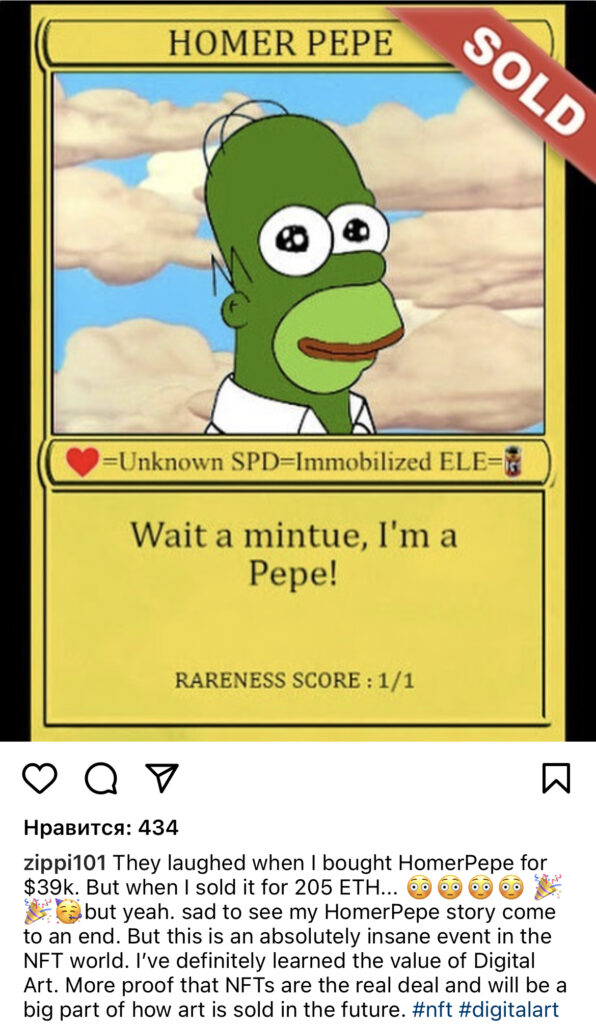 Later in 2017 “CryptoKitties” emerged -  the blockchain analog of the Tamagotchi. CryptoKitties is a game developed by Canadian studio Dapper Labs. It allows players to keep virtual cats. The most expensive kitty named Dragon was sold for 600 ETH in 2018. At that time it equaled $170,000 approximately.

Now 4 years later the same Dapper Labs is in association with the NBA (National Basketball Association) working on the digital development of the NBA and its implementation into the blockchain. The original NFT marketplace, NBA Top Shot, raised over $230 million in sales of “basketball cards”. One of the most prominent sales on the Top Shot can be considered the NFT of a video clip of Lebron James’ epic dunk. It was sold for $200,000. 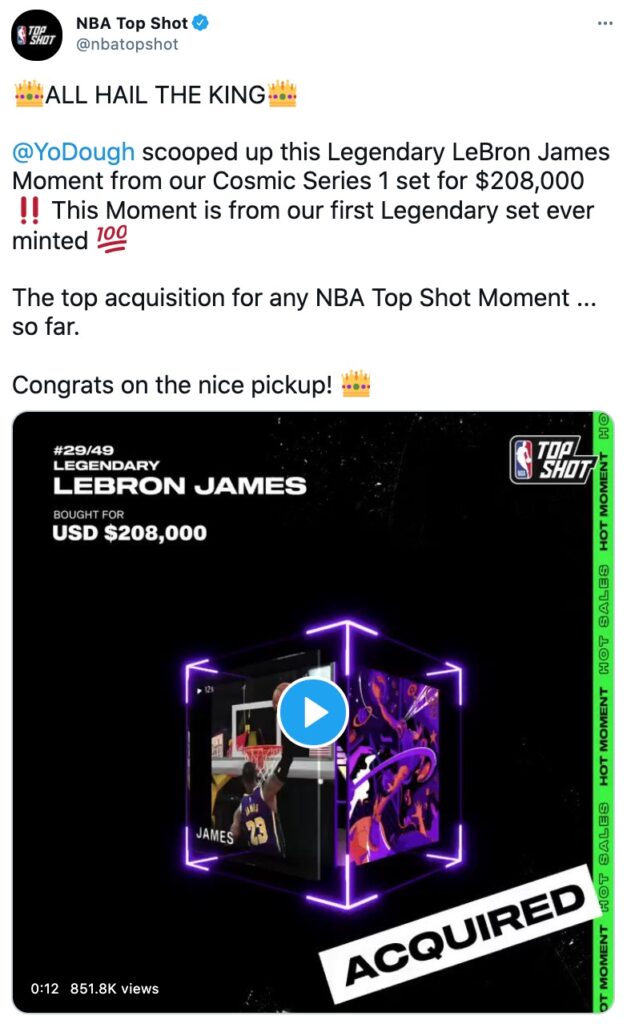 Lebron James is not the only sportsman who exposed himself in the NFT spree. Christiano Ronaldo’s NFT token was sold for over $290,000, surpassing Lebron’s NFT. It was bought by a Sorare user Camembert who claimed that he would never buy a Picasso, but was very happy to invest $300,000 in his idol.

NFTs all over the place?

Since the NFT spree has been revving up, it has intruded more and more fields of action - economics, gaming, show business, education, real estate, sports, but the most fruitful area seems to be entertainment and art.

First of all, the gaming industry is a rich soil for NFT development. Players are ready to pay for the opportunity to play with the unique characters, wearing and utilizing unique apparel and tools. Moreover, NFT’s interoperability allows users to transfer virtual assets from one dimension to another making the gaming fun limitless.

Further on, DJ 3LAU became the first musician who turned his music album into the limited edition of NFT. It heavied his bank account for $11.6 million.

The singer Grimes - who has a son together with Elon Musk - followed the trend and sold 400 NFTs that she created with her brother. In 20 minutes sold-out NFTs made a $5.8 million dollar profit.

Despite the fact that people can watch videos, buy sports cards, listen to music, etc. without issuing special-edition NFTs, these tokens have become a kind of digital autograph with a limited offer. A fan will always be able to prove that he really discussed with Elon Musk the launch of a rocket to Mars or communicated with Banksy directly.

As for Banksy: his art piece “Morons (White)” was bought by a blockchain company Injective Protocol from Taglialatella Gallery in New York for $95,000 and then set on fire live on Twitter. It’s the first case of transforming physical art into virtual assets. The newly emerged unique tokens were sold within a 5-day-long OpenSea auction. All the raised money was donated to charity.

All in all, the demand for digital art is only growing now. The most favourable NFTs are with the occult symbols and with the animal images. For example, CryptoPunks (CP) created a picture of the pixelart monkey with a hat that was sold for 140 ETH (about $150,000 at that time) in January 2021. The buyer of this picture confessed that one of the reasons he made a purchase was to prove and demonstrate his status in the digital world. Thus we can’t ignore the vivid resemblance between owning NFTs and owning membership in some kind of an elite club, where participants are bonded with belonging to something unique.

Especially success-promising seem to be memes in the form of NFT. A great example is again— CryptoPunks. The company created 10,000 digital avatars and is successfully selling them for a decent price. If the trend keeps bumping, the price will go only one way up.

Even the DC comics company has recently stepped into the crypto market. DC started their journey with hyped and profitable NFTs representing DC superheroes. A recent partnership between VeVe and DC Comics is opening a new phase in the comic book studio’s merch strategy. The most expensive token is a digital state of Nightwing which will cost $89.99 and consists of 1850 copies. Eventually, they are expected to get a revenue under $1 million.

The icing on the NFT cake is the digital collectible «Everydays: The First 5000 Days» by Mike Winkelmann also known as Beeple. Winkelmann is an American digital artist, graphic designer, and animator. His collage of thousands digital pictures was sold for the mind blowing price of $69.3 million.

So why is everybody going crazy about NFTs?

Now you may face a question like “isn’t it crazy to pay this much money for the mere right to claim ownership of the “original” set of pixels that can be reproduced by anyone?” the answer is - probably it is. But if the Internet really is changing everything, why are NFTs something to be surprised about? Maybe the crazy ones are those who expect the future to be nothing different than the past.

To explain this psychological phenomenon we can compare the value of NFTs in their unique nature with the unique nature of rare coins, vinyl records, baseball cards, etc. All of these things are expensive and they are usually exploited within close groups of people. They show off the status of a person and emphasize belonging to the “elite club”. So it is possible to say that NFTs can act as a pass to certain privileges.

As it is still the trend (whether long-term or short-term) there is some prospect that in the following year the capitalization might grow 3-4 times compared to 2020. It sounds quite truthful as Justin Sun (the founder of TRON) has launched the NFT-art fund. According to his words, Sun aims to make JUST NFT Fund the first museum of digital art, where the world's most significant artworks will be legally acknowledged. 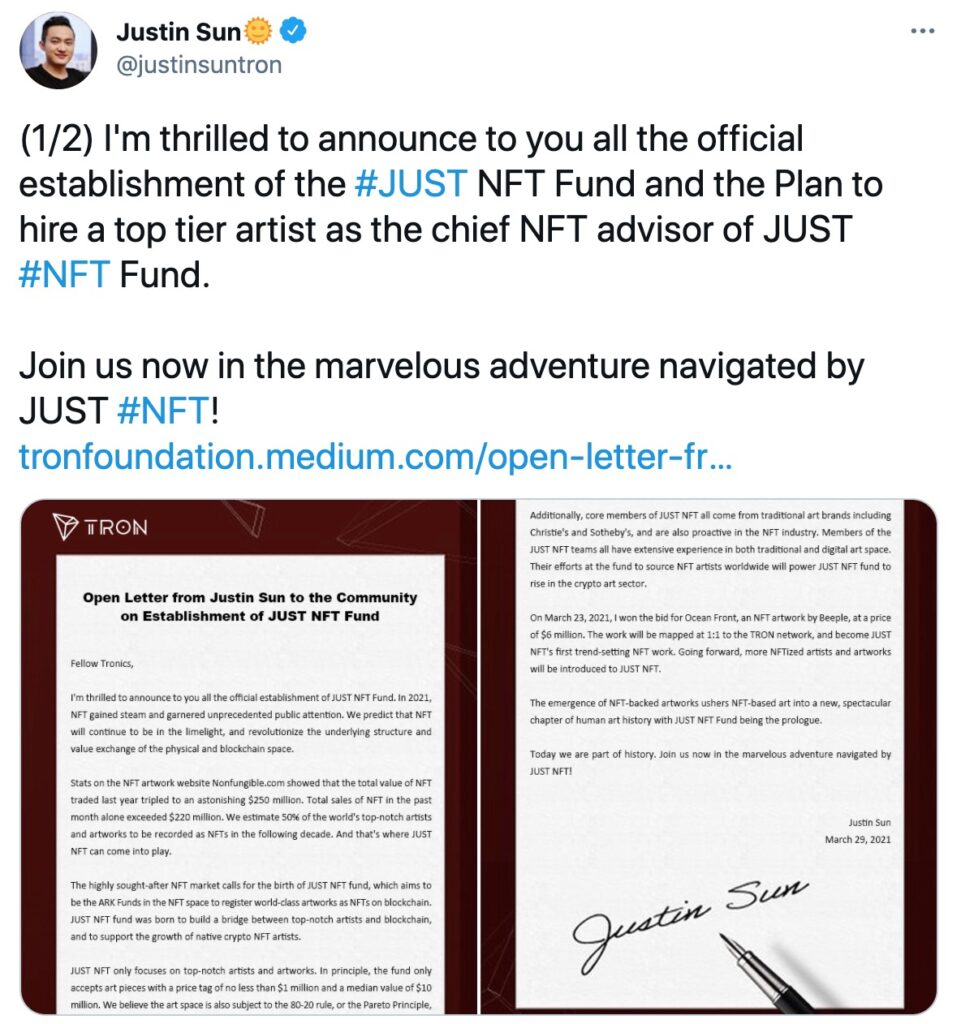 More than that NFTs are prone to make a revolution in the field of property rights, as they confirm the authenticity online and make sсams more difficult to complete. Copyright protection would become more open yet secure, which would positively affect many fields of our everyday life.