Cryptocurrency is gradually going beyond the limits of the financial world or the IT sphere. Nowadays crypto is widely being introduced into all areas of human life, including the area of art.

Cinema is one of the fastest to respond to new developing phenomenа. Let's remember some movies, cartoons, and series where the cryptocurrency was mentioned.

One of the first cryptocurrency releases on screen happened in 2012 in the "The good wife" series. There is a story about the prosecutor's wife working as a lawyer who defends another lawyer. His case is interesting for us, because under threat of arrest, he keeps the name of his client - the creator of the cryptocurrency.

"The Simpsons" series certainly surprised their viewers a lot during its existence. They predicted the economic crisis, the presidency of Donald Trump, and many other things. In season 25 of "The Simpsons", Bitcoin was also mentioned. There was the inscription depicted on a billboard near the Springfield Elementary School saying "accepting Bitcoin".

The phenomenon of Bitcoin just couldn’t be missed by another popular animated series called "Family Guy". The main character of this cartoon, Peter, tried to solve all his financial problems with Bitcoin.

In 2015 the film "Dope" was released. The main character of the film earns money by selling drugs and uses "digital gold" as money. By the way, this was the first movie that people could pay with Bitcoin to watch.

In 2017, Bitcoin was featured in the "The Big Bang Theory" comedy series. In one of the episodes the main character of the series, Sheldon, offers his friends to mine new virtual currency.

There is also a cartoon dedicated to the most popular crypto. The animated series called "Bitcoin and friends" tells about the history of the Bitcoin cryptocurrency. There are episodes that you can already find on YouTube. This is a story about a coin that on the way of its adventure meets characters who become pillars of crypto history.

And, of course, the most discussed crypto movie of 2022 is on our list — “Trust No One: The Hunt for the Crypto King” which was released on March 30. The main storyline tells us about the group of investors who have become true detectives trying to solve the mystery of Gerry Cotten’s death, a multimillionaire who has created a largest Canadian crypto exchange. The issue is that he didn’t leave any passwords to unlock the customers’ holdings. So the investors also aim to get back $250 000 000 they think he snatched from them.

There are several dozen tracks where Bitcoin is mentioned. These songs are mostly in English and performed in the hip-hop genre. Let's list some of them below:

One artist from Toronto, Nelly Baksht, managed to combine two such different areas as art and crypto together. Combining artistic talent with a vision of modern technology, Nelly creates bright and positive paintings. She depicts the creation of a better world without the destruction of the old one. Her works are not focused on memes popular in the industry, they explore the social background of the blockchain and decentralization through artistic expression. Nelly's works can be purchased not only for fiat but also for a cryptocurrency (Ethereum and Bitcoin) — and the authenticity of her works is confirmed through the Ethereum blockchain.

American artist, Andy Bauсh, created a group of works of art using LEGO parts with private keys of blockchain wallets encrypted in them. Unraveling the cipher of each of the paintings, which have the common name New Money, provides access to a Bitcoin client that stores an amount equal to $10,000. Creating his works, the master used a special algorithm for the generation of abstract images based on the keys. Each Lego drawing costs between $1,800 and $4,500. Bauch also gave small hints to reveal the secret of the painting.

On March 15, 2018, a monument dedicated to Bitcoin and blockchain technology was raised in Kranj (Slovenia). The monument resembles Bitcoin, but the official website states that it is dedicated to the blockchain. Thus, the authors of the design on behalf of Slovenia send a message to the world about the country's openness to new technologies and the development of progressive thinking. The proposal to install this monument was made by the mayor of the city and the chairman of the local municipality.

Also in 2018, a three-meter high statue of "Crypto Connection" was installed in London. It was created by Italian artist Federico Clapis, commissioned by Eidoo - the Creator of a platform that combines the functions of a cryptocurrency wallet and a decentralized exchange. The sculpture was placed on a viewing platform on the South Bank of the Thames between the Oxo Tower and the BFI Southbank cinema. This sculpture was put there temporarily, and its installation was a marketing decision to promote the new Wallem mobile game. This game allows people to search for tokens in the city.

Let's also look at the technical side of the art creating process and its intersection with IT technologies. Perhaps the most significant impact of the blockchain has been put in the area of digital art. Artists who create drawings (or other types of digital art) and post them on the Internet are constantly facing problems with copyright and authenticity of works. Now creators who want to certify their pieces of art simply send them to a special platform. After checking for uniqueness, artists get their own smart identification number - the equivalent of the copyright certificate. Looking at this number, buyers will know exactly that they own the original masterpiece. 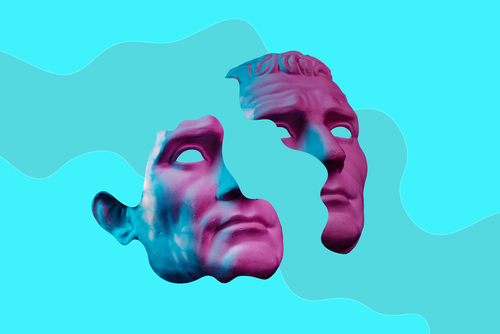 The more popular crypto becomes, the more life spheres it covers. NFT art is everywhere now and people are ready to spend thousands of dollars on digital pictures sold by crypto artists. From the hypnotizing Nyan Cat to all kinds of badass CryptoPunks (we have a whole article about those guys, have a look) there’s a pile of items available for purchase — and still plenty of room for creativity left for artists to make more NFTs!

Many of you might have heard about NFT, but do not know what it actually is. It is a digital asset existing in the digital universe where no one can touch it, but anyone can buy it. Articles, songs, memes and artworks — all of these things can be NFT, but only if stored on a blockchain. If you are searching for a crypto wallet to keep NFTs, we recommend you check SimpleHold.

What’s so cool about NFT? While anyone can just look at NFTs, the person who buys them gets the status of the official owner. That gives some kind of a digital right to brag. And if you are thinking of picking up some masterpieces, check out the most popular NFT artists of 2022.

His real name is Mike Winkelmann and he leads the top of the best selling NFT artists for quite some time. Beeple had his piece called "Everydays: The First 5000 Days" selling in the Christie's auction house for $69,346,250. That was actually the 1st time an auction house sold crypto art and received cryptocurrency as a payment.

﻿﻿﻿﻿
The average price of Beeple’s piece is $127,283 each. Artist is actively posting on Instagram continuing his Everydays series. His art is realistic yet absurd and controversial. He usually refers to politics, ecology and public morality.

Pak is an anonymous artist ranked as a real moneymaker among the NFT-creators. Pak’s average sale of $6,646.17. His priciest art named Clock was sold for $57,308,276.75. Although it didn’t resemble a real clock, it was made to count the days the founder of WikiLeaks, Julian Assange, has spent in an English prison. This piece was created in order to fund the legal protection of Assange.

Recently Pak has launched his own digital platform — Sotheby’s Metaverse — for selling and hosting NFTs. He also started a sell-off for Merge collection using Nifty Gateway platform. Merge was available for a short period of time in December. Generally Pak has earned almost $92,000,000.

Dmitri Cherniak is well-known in the Crypto World, his career started in 2014. Being one of those fellows who implemented Coinbase’s BTC tipping widget, now Dmitri is an artist who creates NFTs. There are 18 pieces in his gallery. The average price amounts to $459,357.

﻿﻿﻿﻿
Cherniak’s art is pretty simple yet attractive — he uses clean bright lines, cool colors and nontrivial geometric figures. It makes him stand out from many artists using aggressive and edgy ways of expression.

Mad Dog Jones was once called the most expensive Canadian artist after he sold his first NFT, “Replicator” for $4,100,000. Then, he has ascended to the top-10 best selling NFT artists in the whole world. His personal style might be identified as a Japanese cyberpunk which makes his pieces very recognizable and familiar.

﻿﻿﻿﻿
Now, the average price for Mad Dog’s art is $12,058.19 for an item. Artist posts all of his works on Instagram, pushing more people to become fans of his amazing pieces.

That’s how cryptocurrency and blockchain technologies are poured into all spheres of modern life, including art. Perhaps soon, thanks to new technology, we will be able to see crypto even in the theatre.

Still have no idea why everybody’s crazy about the NFT? We explained it here, make sure to check it out.

What will the upcoming update bring us?

Let’s take a look at crypto projects that develop their metaverses and attract attention in 2022.

What will the upcoming update bring us?

Let’s take a look at crypto projects that develop their metaverses and attract attention in 2022.